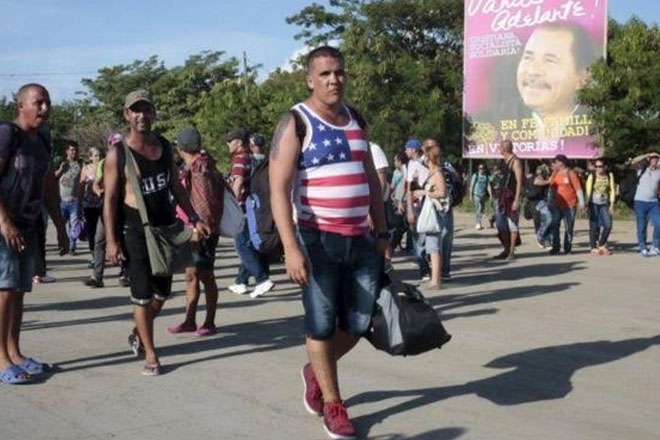 (BBC) Nicaragua has turned back hundreds of Cuban migrants which it accuses of “storming” its border crossing from neighbouring Costa Rica on Sunday.

The Cubans are travelling north, trying to reach the United States by land.

They fear that with ties between Cuba and the US improving, the US could stop granting Cubans who reach the US by land the right to stay.

The Cubans said they had flown to Ecuador from where they had made their way north through Colombia and Panama to Costa Rica.

They reported being stranded in Costa Rica after the trafficking ring which they had paid to get them to the US was broken up by the authorities.

Nicaragua’s left-wing government, which has close ties to Cuba, said that move had “unleashed a humanitarian crisis with serious consequences for our region”.

The Cubans told Nicaraguan media they had waited for hours to be granted Nicaraguan transit permits before getting impatient and entering the Penas Blancas border post by force.

They continued on foot on the Panamerican Highway north, where they were met by Nicaraguan security forces who took them back to Costa Rica.

“When other countries take the irresponsible decision to close their borders, people will use any means to reach their destination,” he said.