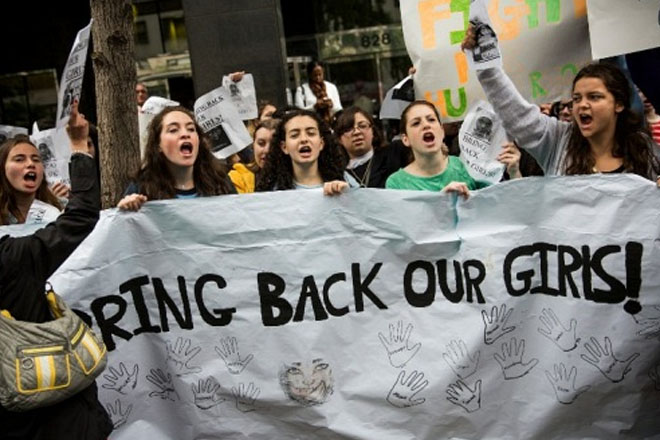 Abuja, Nigeria (AFP) — Nigeria’s president-elect Muhammadu Buhari on Tuesday cautioned he could not make promises on the return of 219 schoolgirls kidnapped by Boko Haram, as the country marked the first anniversary of their abduction.

The comments by Buhari, who takes office on May 29, stand in contrast to outgoing President Goodluck Jonathan, who has repeatedly said the girls will be found, and the military, which said last year it knew where the teenagers were being held.

A march was held in Abuja symbolically involving 219 schoolgirls, part of a number of events around the world to mark the abduction, which Amnesty International said was one of 38 since the start of last year that had seen at least 2,000 women taken by the militants.

The UN and African rights groups also called for an end to the targeting of boys and girls in the conflict, which has left at least 15,000 dead and some 1.5 million people homeless, 800,000 of them children.

Buhari said there was a need for “honesty” in his new government’s approach to the girls’ abduction, with nothing seen or heard from the students since last May when they appeared in a Boko Haram video.

“We do not know if the Chibok girls can be rescued. Their whereabouts remain unknown. As much as I wish to, I cannot promise that we can find them,” he said in a statement.

“But I say to every parent, family member and friend of the children that my government will do everything in its power to bring them home.”

Schoolgirls, wearing red T-shirts and holding placards with the kidnapped girls names on them, marched to the education ministry to demand the hostages’ immediate release.

“We, the Chibok Girls Ambassadors, are demanding that the government of Nigeria should give us clear details of what is being done to bring back our sisters,” said one, Rebecca Ishaku.

“We ask that the government, as a matter of priority, makes education safe in all parts of Nigeria while prioritising the return of our sisters.”

The UN special envoy on education, Britain’s former prime minister Gordon Brown, described the campaign as “the most iconic fight of a freedom struggle”.

“The fight will be won some day. No injustice can last forever. But for the sake of these girls, it must be won soon,” he wrote in The Guardian newspaper.

Chibok elder Enoch Mark, whose daughter and niece are among the captives, said no events were planned in the town, as it was still in “perpetual fear” of Boko Haram, despite the presence of troops.

“The last year has been a period of sadness, emotional torment and hardship. It has been a year of mourning. We are a bereaved community that has lost 219 daughters,” he told AFP.

Buhari was now their hope of finding the girls, dead or alive, he said, pointing to the former army general and military ruler’s success in putting down a similar Islamist rebellion in 1984.

Boko Haram fighters stormed the Government Secondary School in Chibok on the evening of April 14 last year, seizing 276 girls who were preparing for end-of-year exams.

Fifty-seven escaped soon afterwards. Boko Haram leader Abubakar Shekau has since said the remainder have all converted to Islam and been “married off”.

The mass abduction brought the brutality of the Islamist insurgency unprecedented worldwide attention and prompted a social media campaign demanding their immediate release.

Nigeria’s government was criticised for its initial response to the crisis and was forced into accepting foreign help in the rescue effort after a groundswell of global outrage.

In a new report published on Tuesday, Amnesty quoted a senior military officer as saying the girls were being held at different Boko Haram camps, including in Cameroon and possibly Chad.

Testimony gathered by Amnesty from women and girls who escaped the militants said they were subject to forced labour and marriage, as well as rape.

#BringBackOurGirls organisers thanked supporters across the world, from ordinary men, women and children to public figures such as US First Lady Michelle Obama and Nobel laureate Malala Yousafzai.

The girls have become “the symbol for the defence of the dignity and sanctity of human life, of the girl child, women, for all those oppressed, repressed, disadvantaged, hurting, unsafe,” they said.

Malala, who was shot and nearly killed by the Pakistani Taliban for advocating girls’ education, on Monday published an open letter to the Chibok girls, describing them as “my brave sisters”.

The 17-year-old criticised Nigerian and world leaders for not doing enough to help secure their release and called the girls “my heroes”.

Twenty-one of the 57 girls who escaped are currently studying at the American University of Nigeria.