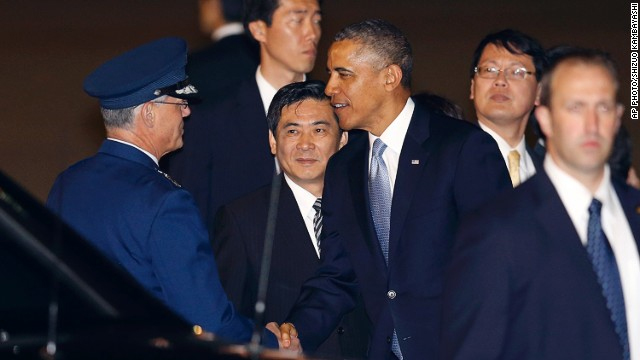 Tokyo (CNN) — President Barack Obama arrived in Japan on Wednesday for the first part of his Asia trip that started with reassuring Tokyo of U.S. support in its bitter territorial dispute with China.

Obama landed in Tokyo aboard Air Force One, his first stop on a weeklong tour that will also take him to South Korea, Malaysia and the Philippines.

In Tokyo, Obama planned to meet with Japanese Prime Minister Shinzo Abe over sushi Wednesday evening. He’ll then start a formal state visit to the nation beginning Thursday— the highest designation for a foreign leader.

His first stops in Japan will be tinged with formality — meetings with the royal family, a stop at the Meiji shrine, and a protocol-bound state dinner.

Japan’s first state visit by an American president in decades comes as the United States works to reassure Abe and other Asian leaders that the U.S. remains committed to turning foreign policy focus on them.

The so-called “pivot to Asia,” which began almost three years ago, meant to put a greater emphasis on diplomatic and economic efforts toward Pacific nations in an effort to counterbalance China’s influence in the region.

In the intervening years, however, Middle East uprisings, the Syrian civil war, and new diplomacy with Iran have made some Asian leaders wonder when the “pivot” would take shape.

Obama’s trip this week is partly meant to turn the U.S. spotlight back on Asia.

At the start of his long-awaited visit, Obama waded into a fraught territorial dispute between Japan and China.

He told a Japanese newspaper that a group of uninhabited islands in the East China Sea claimed by both Tokyo and Beijing “fall within the scope” of a U.S.-Japanese security treaty, implying the United States could step in militarily in the event of a clash over the territory.

It’s the first time an incumbent U.S. President has made such a statement on the bitterly disputed islands, and comes as Asian nations nervously watch the United States’ response to Russia’s incursion into Ukraine.

Japan has eyed the Ukraine situation particularly closely, given its own territorial disputes with China. Obama’s comments Wednesday should dispel at least some of its worry.

“We oppose any unilateral attempts to undermine Japan’s administration of these islands,” Obama said in answers to questions submitted by The Yomiuri Shimbun.

Both Tokyo and Beijing say the islands, known as Senkaku in Japan and Diaoyu in China, are an inherent part of their territory. Taiwan, which lies about 190 kilometers (120 miles) southwest of the islands, also stakes a claim to them.

“The United States should respect the truth, not take any sides, be careful about its words and behavior, and uphold peace and stability,” said Qin Gang, a spokesman for the Chinese Foreign Ministry.

But Obama’s comments are likely to provide some reassurance to Japan. The Chinese government has stepped up efforts in recent years to challenge Japan’s control of the small, rocky islands and the waters and airspace around them.

Obama’s efforts to reassure Asian allies also extend to his push for the Trans Pacific Partnership, a massive trade deal the White House hopes will open economic channels in the region.

In the works for years, the Japan portion of the trade deal is not expected to be finalized during Obama’s visit this week — due to disagreements between the U.S. and Japan, and a delay in Congress from members of Obama’s own party.

The resistance to approving the trade deal, along with another trade pact being negotiated with Europe, stems from Democrats’ worry the agreements would kill jobs. They’re not likely to come on board at least until November’s midterm elections.

“The President has developed credibility problems in terms of delivering on the congressional support,” said Kenneth Lieberthal, who handled Asia policy in Bill Clinton’s White House and now acts as a senior fellow at Brookings.

“My own sense is … that there’s less confidence that the President has effective in dealing with the Congress and that may really be a major issue in finalizing TPP.”

Despite the stalemate, U.S. officials have remained bullish the deal would be good for the U.S. economy.

“This remains a very important aspect of our rebalance to the Asia Pacific region, one that holds great promise for the countries in the region as well as for the United States,” Obama’s National Security Adviser Susan Rice said last week. “We’ll continue to work toward that given its significance to all concerned.”