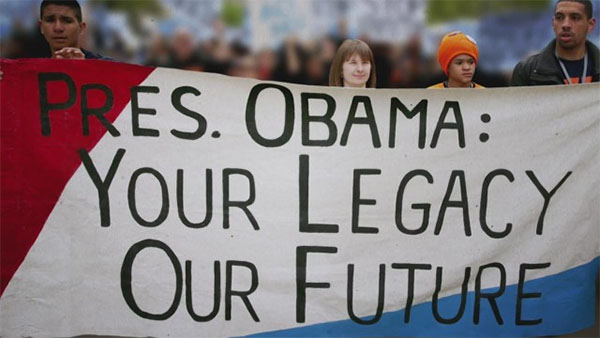 Obama: No greater threat to future than climate change

(CNN) — What President Barack Obama described as the greatest threat to future generations was neither terrorism nor ISIS. It wasn’t nuclear weapons in rogue states either.

“No challenge  poses a greater threat to future generations than climate change,” said Obama in his State of the Union speech Tuesday.

His statement was met with scattered, muted applause.

The United States should lead in international efforts to protect “the one planet we’ve got,” he said.

2014 was the warmest year since record keeping began.

But American commitment to reduce greenhouse gas emissions and curb global warming has been intermittent throughout the years.

The United States did not ratify the Kyoto Protocol, a binding agreement in 1997 to cut greenhouse gas emissions. A 2007 U.N. climate change conference ended with anger at the United States, then under the Bush administration, when it balked at binding carbon cuts.

“We were used to having U.S. as a pariah,” said Liz Gallagher, the program leader of climate diplomacy at E3G, an environmental group.

Environmentalist noted a shift in recent years under Obama, including a recent agreement with China to reduce emissions.

“It’s better to have America inside the game than outside. It makes it easier to persuade everyone else,” said Gallagher.

The U.S. remains the second greatest polluter, behind China.

“Because the world’s two largest economies came together, other nations are now stepping up, and offering hope that, this year, the world will finally reach an agreement to protect the one planet we’ve got,” Obama said during his speech.

A critical UN Climate Change Conference will be held in Paris in December this year, aimed at reaching a legally-binding, international climate agreement.

“This is a pivotal year for advancing the climate effort both at home and internationally, and the president’s continued leadership is essential on both fronts,” said Bob Perciasepe, president of the Center for Climate and Energy Solutions.

Climate change disproportionately affects the most impoverished. Rising sea levels, threatened water and food supply devastate people’s lives. A U.N. Intergovernmental Panel on Climate Change warned in a report that the effects of climate change could cost governments around the world more than$100 billion a year.

Since 1880, the Earth’s average surface temperature has warmed by about 1.4 degrees Fahrenheit (0.8 degrees Celsius), according to NASA scientists. Most of the warming has occurred in the past three decades.

“The best scientists in the world are all telling us that our activities are changing the climate, and if we do not act forcefully, we’ll continue to see rising oceans, longer, hotter heat waves, dangerous droughts and floods, and massive disruptions that can trigger greater migration, conflict, and hunger around the globe,” Obama said. “The Pentagon says that climate change poses immediate risks to our national security. We should act like it.”