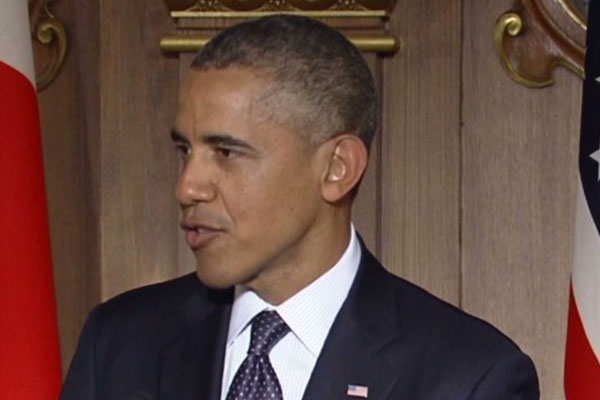 Tokyo (CNN) — The United States stands by its security agreement with Japan in its dispute with China over a group of islands, President Barack Obama said Thursday.

The securities agreement between Washington and Tokyo is decades old, he told reporters in the Japanese capital. And it would be honored in any conflict arising out of tensions over the islands that Japan calls Senkaku and China calls Diaoyu.

But the President, who spoke alongside Japanese Prime Minister Shinzo Abe, would not say how the United States would get involved in any strife over the islands.

The group of islands and rocks jutting out of the ocean is tiny and uninhabited. But the long-standing dispute over them has sent tempers flaring in Beijing and Tokyo, especially in recent years.

The area around them in the South China Sea between Taiwan and Okinawa is believed to be rich in oil resources.

Senkaku is administered by the Japanese, but the Chinese claim they are the rightful owners.

The possibility of a war over the islands has been a thorn in the side of the United States, which says it is obligated by the common security agreement to back Japan.

Obama repeatedly urged that Japan and China to seek a peaceful resolution through dialogue.

“I emphasized with Prime Minister Abe the importance of resolving this issue peacefully — not escalating the situation, keeping the rhetoric low, not taking provocative actions and trying to determine how Japan and China can work cooperatively together.”

Escalating the tensions would be a “profound mistake,” Obama said.

The President also reiterated that the United States does not take a position on whom the islands belong to.

He applied this to other internationally disputed territories, alluding to tensions in Ukraine.

“But we do take a position in making sure that all countries are following basic international procedures in resolving these disputes,” Obama said.

“I think the alternative is a situation, in which large countries like the United States or China or Russia or other countries feel whenever they think it’s expedient they can take actions that disadvantage smaller countries.”

The President said that the United States should not be expected to engage militarily when these laws are violated.

Japan’s Prime Minister placed more emphasis on the military alliance than Obama did.

He said that his meeting with the U.S. President had strengthened the confidence in the alliance between the two countries.

Abe said this was not meant as intimidation toward other countries in the region, but he also hinted that Japan would not be coerced to change its claim to the disputed islands.

“Changes of the status quo based on intimidation and coercion will not be condoned,” he said. “We want to make this a peaceful region, which values the laws, and in doing this, strengthening of our bilateral alliance is extremely important.”

On Wednesday, Obama had told a Japanese newspaper that the group of uninhabited islands “fall within the scope” of the U.S.-Japanese security treaty.

“The United States should respect the truth, not take any sides, be careful about its words and behavior, and uphold peace and stability,” said Qin Gang, a spokesman for the Chinese Foreign Ministry.

The President’s trip to Japan is the first state visit by an American president in almost two decades.

The “pivot to Asia,” which began almost three years ago, meant to put a greater emphasis on diplomatic and economic efforts toward Pacific nations to counterbalance China’s influence in the region.

Obama’s efforts to reassure Asian allies also extends to his push for the Trans-Pacific Partnership, a massive trade deal that the White House hopes will open economic channels in the region.

In the works for years, the Japan portion of the trade deal is not expected to be finalized this week — due to disagreements between the United States and Japan, and a delay in Congress from members of Obama’s party.

The resistance to approving the trade deal, along with another trade pact being negotiated with Europe, stems from Democrats’ worry the agreements would kill jobs. They’re not likely to come on board at least until November’s midterm elections.

Tokyo is the first stop on a weeklong tour of Asia that will also take the President to South Korea, Malaysia and the Philippines.