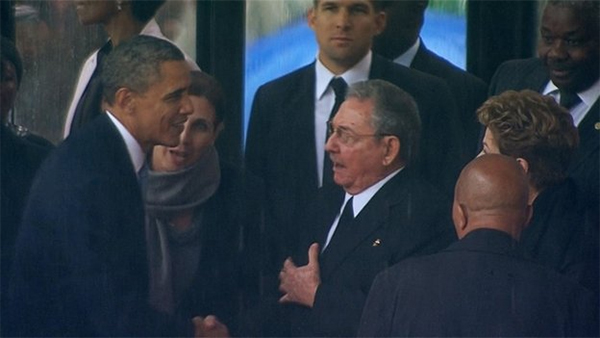 Washington, USA — In what has been described as a “stunning” development, US President Barack Obama announced on Wednesday that the United States will restore full diplomatic relations with Cuba and open an embassy in Havana for the first time in more than 50 years.

In addition, the US will ease restrictions on remittances, travel and banking relations, and Cuba will release 53 Cuban prisoners identified as political prisoners by the United States government.

Cuba also released on Wednesday Alan Gross, an American contractor held in prison in Cuba for five years and the United States sent back three Cuban spies who had been in an American prison since 2001. American officials said the Cuban spies were swapped for a United States intelligence agent who had been in a Cuban prison for nearly 20 years, and said Gross was not technically part of the swap, but was released separately on “humanitarian grounds.”

Gross was in Cuba to deliver satellite telephone equipment that was capable of cloaking connections to the internet when he was arrested in 2009. The Cuban authorities claimed that he was a spy, and he was convicted of bringing in the devices without a permit as part of a subversive plot to “destroy the revolution.”

Although the decades-old US embargo on Cuba will remain in place for now, Obama said he would welcome a move by Congress to ease or lift it.

Obama spoke with Cuban President Raul Castro by telephone on Tuesday to finalise the agreement in a call that lasted more than 45 minutes, the first direct contact between the leaders of the two countries in more than 50 years, US officials said.

Obama said he has instructed Secretary of State John Kerry to initiate discussions with Cuba about re-establishing diplomatic relations and to begin the process of removing Cuba from the list of states that sponsor terrorism.

The Obama administration will also begin working with Cuba on issues such as counternarcotics, environmental protection and human trafficking, the president said.

Obama will also allow greater banking ties and raise the level of remittances allowed to be sent to Cuban nationals to $2,000 every three months from the current limit of $500. Intermediaries forwarding remittances will no longer require a specific licence from the government. American travelers will also be allowed to import up to $400 worth of goods from Cuba, including up to $100 in tobacco and alcohol products.

Wednesday’s announcement prompted expressions of both support and criticism from lawmakers in Washington.

Among those expressing cautious optimism about the prospects of a broader thaw in relations between the US and Cuba was Florida’s senior US Senator Bill Nelson, a long-time Castro regime critic and economic embargo supporter.

“The success of this monumental development depends on Castro’s willingness to grant basic democratic freedoms for the Cuban people,” Nelson said.

Asked on Wednesday whether he would now favour the US easing its five-decades-old economic embargo against the Communist island, Nelson said, “Let’s see if Castro changes the behavior of a brutal police state and provides freedoms for the Cuban people.”

Another Florida Senator, Marco Rubio, commented, “This is going to do absolutely nothing to further human rights and democracy in Cuba. But it potentially goes a long way in providing the economic lift that the Castro regime needs to become permanent fixtures in Cuba for generations to come.”