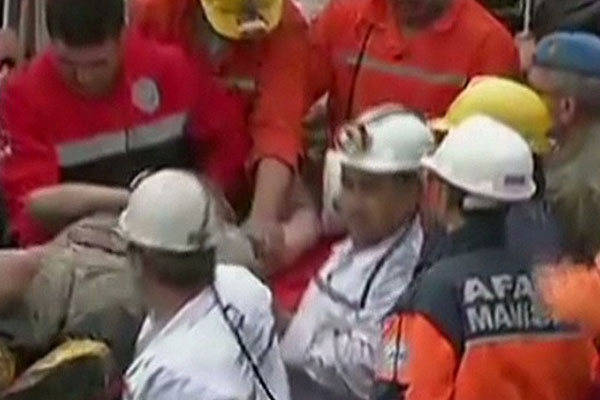 Soma, Turkey (CNN) — As a crowd milled around with downcast eyes outside a coal mine in western Turkey on Wednesday, a miner dashed their hopes that his co-workers still stuck inside would make it out alive.

There are 200 of them trapped in a shaft about two-thirds of a mile — or 1 kilometer — underground, disaster officials have said. But many miners are missing, so the number could be much higher.

The miner and some friends had crawled out of the burning mine in the town of Soma on their own, he told a reporter from CNN’s sister network CNN Turk.

He choked up as he said that he couldn’t imagine anyone else having the same luck.

The fire, which started after a transformer blew up, was still burning and preventing help from getting to the trapped miners, Turkey’s energy minister said. The death toll is at 232, Turkish Prime Minister Recep Tayyip Erdogan said Wednesday.

Smoke rose from openings in the ground around the mine a day after the fire broke out.

‘Our hopes are diminishing’

Early Wednesday, emergency crews had hauled up dozens of survivors as a crowd looked on in the post-midnight darkness. All but eight were injured.

CNN Turk aired the rescue of one miner to a cheering crowd.

But progress has stopped at the mine, as the number of those rescued inched up slightly to a total of 93.

“Our hopes are diminishing,” Yildiz said.

He had no official update of the death toll, but he expected it to rise.

Officials have carried out 72 autopsies. The dead and injured seemed to be suffering from burns and suffocation, said Muzaffer Yurttas, the region’s member of parliament.

Police officers have poured into Soma, a town of less than 100,000 people, and lined its main street with barriers.

People massed in front of the city hospital as ambulances rushed to and from it. A funeral truck appeared nearby. Flags flew at half-staff as helicopters buzzed overhead.

Around the mine, authorities have deployed more than 500 personnel. They include rescuers, medics and forensic experts, but also psychologists and social workers.

The trauma from what may be the worst mine disaster in Turkish history has left Soma and the rest of Turkey in shock. A mining accident in the 1990s took 260 lives. This one has the potential to top it.

The explosion occurred during a shift change, when managers believe 787 miners were at work underground. Only 363 have been accounted for so far.

Erdogan canceled a visit to Albania and is traveling to Soma to comfort those whose loved ones are trapped inside the mine.

Erdogan’s political opponents awaited him in Soma with accusations about the tragedy.

Opposition politician Ozgur Ozel from the Manisa region had filed a proposal in late April to investigate Turkish mines after repeated deadly accidents.

Sometimes three people died, sometimes five, said opposition spokesman Aykut Erdogdu. And Ozel wanted to get to the bottom of the deaths.

Several dozen members of opposition parties signed on to his proposal, but the conservative government overturned it. And some of its members publicly lampooned it, he said.

The mine, owned by SOMA Komur isletmeleri A.S., underwent regular inspections in the last three years, two of them this March, Turkey’s government said. Inspectors reported no violation of health and safety laws.

Opposition members have scoffed at those inspections’ validity.

The company has taken down its regular website and replaced it with a single web page in all black containing a message of condolence.