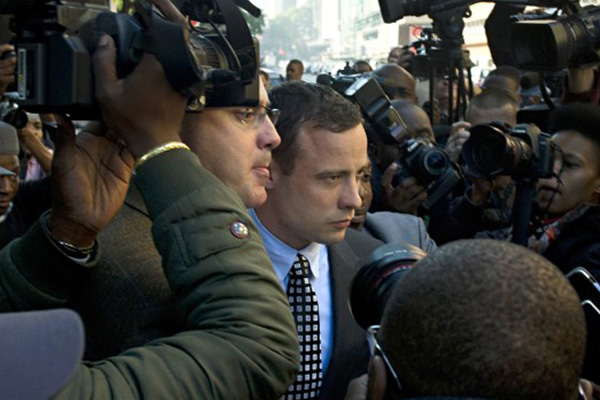 Johannesburg (CNN) — A South African high court ruled Tuesday that cameras will be allowed in court for part of athlete Oscar Pistorius’ trial in the killing of his girlfriend.

Pistorius goes on trial on March 3, accused of murdering his girlfriend, model and law school graduate Reeva Steenkamp, just over a year ago.

The double amputee Olympic star does not deny killing Steenkamp, but he says he mistook her for a home invader when he shot her in the bathroom of his upscale home in Pretoria.

In his ruling, Mlambo said the question of whether the trial should be televised shows the conflict between the right of the accused to a fair trial and the right to freedom of expression for the media and the principle of open justice.

To balance those interests, the judge said Pistorius and defense witnesses, as well as prosecution witnesses who choose not to give consent, should not be filmed by TV cameras as they testify. He also placed some limitations on still photography.

However, the prosecution and defense opening statements and closing arguments, police evidence and experts’ testimony can be broadcast on TV, Mlambo said, and live audio recording will be permitted for the whole trial.

“The justice system is still perceived as treating the rich and famous with kid gloves whilst being harsh on the poor and vulnerable,” the judge said.

“Enabling a larger South African society to follow first-hand the criminal proceedings which involve a celebrity, so to speak, will go a long way into dispelling these negative and unfounded perceptions about the justice system, and will inform and educate society regarding the conduct of criminal proceedings.”

Since being freed on bail, Pistorius has remained largely out of the spotlight. He released a statement on the anniversary of Steenkamp’s death, saying he would carry the “complete trauma” of the day forever.

“No words can adequately capture my feelings about the devastating accident that has caused such heartache for everyone who truly loved — and continues to love Reeva,” he said on his website.

Steenkamp’s family members, including her mother, have said they will attend the trial. It will be the first time they will face their daughter’s boyfriend in court.