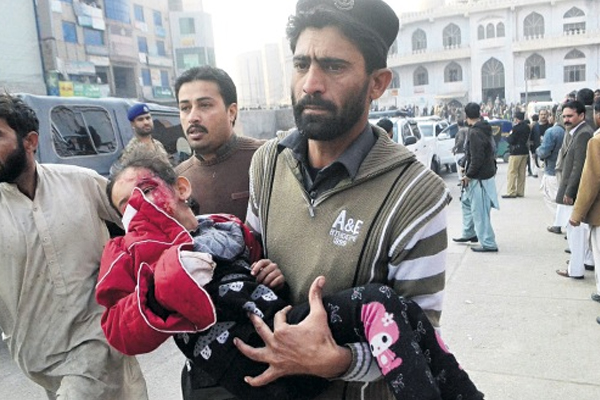 Peshawar, Pakistan (AFP) — Students grieving for their classmates massacred by the Pakistani Taliban Thursday vowed to defy the militants and return to school as soon as possible.

A team of gunmen stormed the Army Public School in Pakistan’s northwestern city of Peshawar on Tuesday, slaughtering 148 people including 132 children in the restive country’s deadliest ever terror attack.

Schools in Islamabad beefed up security on Thursday and carried out safety drills amid fears of a possible bomb attack targeting school buses.

As the nation observed a second day of official mourning, at the school gates in Peshawar there was defiance and a burning desire for revenge against the Tehreek-e-Taliban Pakistan (TTP), whose seven-year insurgency has killed thousands of ordinary people.

Much of the school was devastated in the eight-hour rampage, with walls peppered with bullets and shrapnel from suicide blasts and walls and floors awash with blood.

But officials pledged to clean and restore the buildings and reopen on January 4 — less than three weeks after the attack.

There were emotional scenes outside the school as hundreds of students and parents gathered to light candles and leave flowers for the dead.

Mohammad Billal, 14, told AFP he would defy his parents’ advice to stay at home, and return to school as soon as he can.

“I will come the moment it opens because I am not scared of terrorists. I know how to send a message to them,” Billal said.

Moakal Jan, 13, lost nine of his friends in the attack but told AFP he too had no fears about returning.

“I study here in this school and I want to continue here, I will be back when it reopens. Life and death is in God’s hands,” Jan said.

Many of the school’s students are the children of army personnel, and like many of his friends, Jan said he wanted to punish the Taliban for Tuesday’s bloodshed.

“I want to be an army officer because I have to take revenge of my friends and school fellows,” he said.

“Since my childhood I have wanted to join the army but now I am absolutely determined to join up,” he said.

“I want to take revenge for my friends, I want to fight the terrorists.”