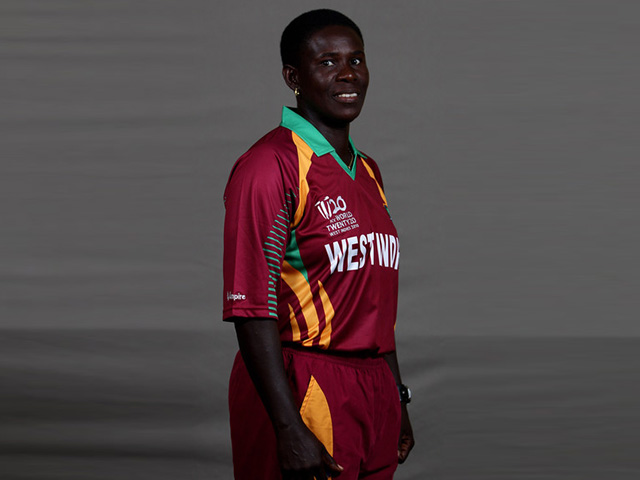 Lavine’s name is almost synonymous with women’s cricket in Barbados. It is called in the same breath as Iris Walker, Pat Whittaker, Angela Harris, Gloria Gill etc because she played the game well and she played it with pride and passion.

Cricket runs strongly in her veins. Her late brother, Mark, played for Barbados and on the professional circuit, and the legendary Gordon Greenidge is her first cousin.

It is no wonder then that she fell in love with the game which she played at her alma mater, St Lucy Secondary School.

Like every other Bajan she started playing with a softball (lawn tennis ball) where she honed her skills and eventually graduated to the traditional hard ball.

Pam was a dashing all-rounder who used her flashing blade to telling effect and was considered one of the best fast-bowling all-rounders in the game, backed up by a pair of safe hands in the field.

She made her debut for Barbados in the regional tournament in 2004 and for the West Indies in the World Cup in South Africa in 2005 at the age of 35, an age when most sportspersons are thinking of retirement.

When England toured the Caribbean in 2009 for a series of ODI’s and T20 matches the veteran all-rounder put on an awesome display and captured the Player of the Series in both versions.

Such was her influence on the game that when she was omitted from the West Indies team for the 2010 ICC Women’s Challenge at Potchefstroom in South Africa it sent shockwaves through the cricketing world.

Her dynamism in the field had lifted the fledging West Indies team to many a victory and when she played her last international in 2010 the West Indies had become a feared name in women’s cricket on the international stage.

Having benefitted so much from the game a still youthful-looking Pamela is determined to contribute to the game she loves and which gave her so much.

She is now a qualified coach and lends the benefit of her knowledge and playing experience to the young stars of tomorrow who will one day take her place.

In addition she remains an active participant in the BCA’s annual Iris Walker Series as a coach and is a committed member of the Celebrity Eleven which plays challenge games against the Barbados Blind Cricket Association.

She had many steps to climb on her way to stardom and particularly makes mention of those who assisted her development viz Messrs Alfred Campbell, Jeff Broomes, Richard Clarke, Alvin Greenidge, Ezra Moseley and Vasbert Drakes, Mesdames Patricia Greenidge and Monica Cumberbatch.

The Barbados Cricket Association pays tribute to this stalwart of the women’s game and looks forward to her continued involvement on the domestic scene.