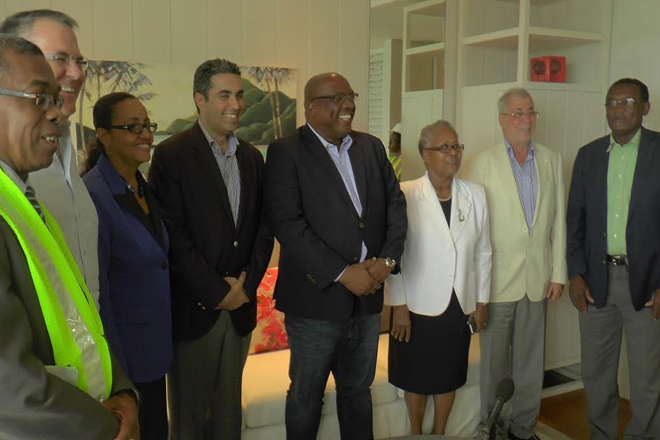 (ZIZ News) — Members of government met with officials of Range Developments and Park Hyatt on Friday to receive a progress update on a hotel construction project at the South East Peninsular.

Range Developments is overseeing the construction of a five star Park Hyatt Resort which is expected to be completed by the third quarter of 2016.

On Friday government officials led by Prime Minister Harris were given a tour of the construction site and one of the completed rooms.

Vice Chairman of Range Developments, Mohammed Asaria said the construction has been going well and is on schedule.

“We are looking to open in quarter three of this year. We are on track. A tremendous amount of work is required over the next few months but with the right determination, progress and ambition and the support of the Prime Minister and the wider Cabinet we’re confident of being able to deliver on our aspirations and ambitions,” he said.

“The reality is, the people who know a destination most are the people who grew up here. To that end, when we’re recruiting we will be reaching out first to the community,” he said.

He however noted that there are standards that need to be met.

“Of course there are criteria that we need to achieve. But if we can’t meet that in the beginning then we’ll hire people at the second level and train them so that they can step up,” he said.

“Julian talked about agriculture; we at Range are willing to go in partnership with the government in starting a modern farm that will supply the product to the hotels, improve quality that they have, make their crops a better quality and get better value,” he said.

Prime Minister Harris commended Range and Park Hyatt for their willingness to contribute to the overall development of St. Kitts and Nevis.

He said “we are looking for a model and maybe through this particular hotel and given the strong corporate responsibility expressed by the movers and shakers by this hotel, the partnership between our farmers and the hotel sector perhaps could be best exemplified through the arrangement. We shall work with the Park Hyatt brand that the farmers can live well, can do well, and can in fact grow.”