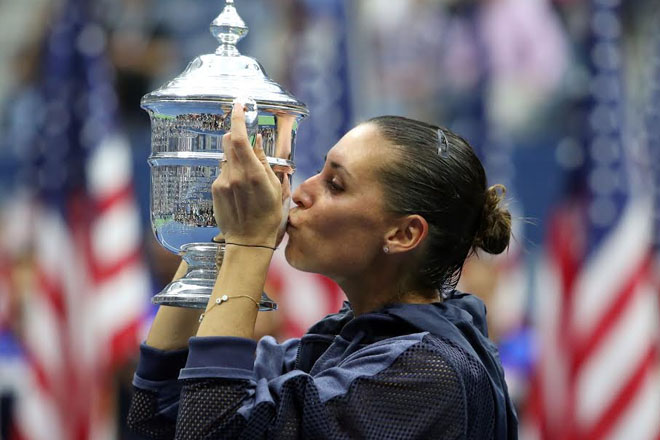 An evenly matched bout in the first set barely got edged in Pennetta’s favor through a dramatic tiebreak, and she took a stranglehold of the match in the second. The No. 26 seed didn’t look back and did not allow Vinci to mount the sort of comeback she mustered one day prior against Serena Williams.

While few expected to see them in a major championship final together, Pennetta and Vinci are well accustomed to facing each other and have put on plenty of dramatic showings before.

But a handful of unforced errors in the tiebreak allowed Pennetta to navigate her way in front with the early set, 7-6 (7-4).

Taking the early lead meant that Pennetta was in the driver’s seat for her first title, and her record in such situations at the U.S. Open pointed toward that,

It didn’t take long in the ensuing set for Pennetta to take further hold of the match and her inevitable title. After starting the set by holding her serve, she broke Vinci’s serve to go up 2-0 and eventually led 5-2 with the chance to close it out.

Even with Vinci serving to stay alive, Pennetta wouldn’t be denied and won four straight points to clinch her title. The jubilation immediately ensued, with Pennetta falling to the court and Vinci quickly congratulating her with a big hug at the net.

Pro tennis coach Martyn Etheridge couldn’t help but appreciate the camaraderie, even with Vinci looking worse for wear after her semifinal Friday:

Both of these over-30-year-olds have been on the tour long enough to rack up plenty of winnings, but these two weeks at Flushing Meadows have undoubtedly revitalized both of their careers. That’s especially so for Pennetta, who hadn’t made it past the quarterfinal in any Grand Slam prior to this.

It’s not just Pennetta’s high seed that makes this victory remarkable and unheralded—she’s also breaking the barriers of age when it comes to women’s tennis. With so many young stars beginning to take over the sport, Pennetta reminded them that veterans still know best.

For Vinci, it’s hard to say she can head home to Italy with her head down. After all, this final encounter came less than 24 hours after she shocked the entire world by toppling Williams in the semifinal and turning the sports universe on its head.

If there’s a consolation in Saturday’s final defeat, it’s that Vinci was able to congratulate a childhood friend in Pennetta in what was the greatest moment of her career.