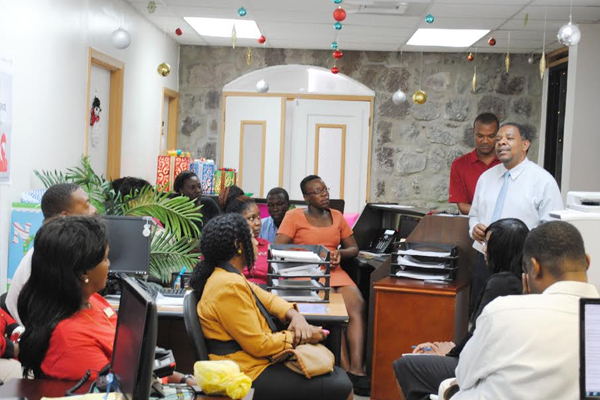 Basseterre, St. Kitts (January 5, 2015) — Chairman of the Management Committee of the People Employment Programme (PEP), Mr Elvis Newton, has said that the programme which was launched in December 2012 has touched lives of persons in very direct ways and has confirmed that it will continue.

He noted that the People Employment Programme has empowered lots of young people in the Federation of St. Kitts and Nevis who were not empowered before.

Mr Newton who is also the Head of the Civil Service and Permanent Secretary in the Ministry of Foreign Affairs and Homeland Security made the comments on Tuesday December 30, 2014 at the PEP office on Church Street Basseterre when addressed the secretariat staff, facilitators, field officers, and support team from the Treasury.

As it relates to the future of the programme, Mr Newton advised the PEP staff that the management team did not have any control over the programme. He however added: “The programme, for all intent and purposes, will continue because that is the political imperative. We have to ensure that the programme is sustainable.”

Accompanied by a member of the PEP Management Committee and the programme’s financial controller, Mr Levi Bradshaw who is also the Federation’s Accountant General, Mr Newton praised him, Ms Desiree Connor of the Treasury, and the Programme’s Project Manager, Mr Geoffrey Hanley, who had run PEP during his (Newton) absence due to illness.

“I want to thank staff on the PEP for the support that they would have given me in my absence,” said Mr Newton. “Notwithstanding that I was away I was able to communicate with Mr Hanley and others so that the programme kept going in my absence – that is really good sign of leadership.

“If the leader is away and we can’t get anything done, then there is something wrong and the leadership fails, and I do not like failed leadership. PEP was able to grow and to expand. I want also to express my profound gratitude to Mr Bradshaw and his staff at the Treasury.”

The PEP Management Committee Chairman commented that even with the challenges and limitations the programme faced, the involvement of the PEP staff and the Treasury support team had shown that there are still good persons, and where there is the vision the people don’t perish. He noted they had gone beyond and above the call of duty to ensure that the political, as well the policy practises, in government were met in the programme.

“We started the programme with some specific objectives,” observed Mr Elvis Newton. “Initially the programme was intended to only serve 1,000 persons. We have gone way beyond – we are now at 3,000-plus. I do not think that persons who are not directly affected by the programme understand the value of the programme for such young persons.

“This programme is really meant to lift people; it is meant to empower people and it is meant to really ensure that at the end of the day that we do not perpetuate cross-generation poverty, but we get people out of their situation. That is what the programme is about.”

According to Mr Newton, the expectation of PEP was never to continue having persons involved in the programme for ever, as he advised that the nature of the programme is to move persons from point ‘A’ to point ‘B’ and at the end they get them out of the programme.

“The programme is really not intended to keep people on so that they could continue being dependant,” explained Mr Newton. “This is not the programme that is intended for that. Some persons, I think, do not understand that and so it is natural when we are making money to think of ourselves.

“But I want us to think beyond ourselves and recognise that the value of the programme is really to ensure that we change the lives of persons who are a part of the programme. And that is the basis on which the programme was facilitated and also initiated by the government and SIDF.”

When the IMF came at the last mission to assess what was happening, they raised some issues, and according to Mr Newton, they thought that the programme was good because it had infused in the economy lots of millions of dollars, which they said was good.

They (IMF) however raised the issue about the sustainability of the People Employment Programme from the point of view of keeping people involved and sustaining it from the point of getting money for its continued funding.

He assured the PEP workers that the government knows the consequences of what it is that it is trying to do, and implored them to be the eyes and ears of the programme because it belonged to them pointing out that “lots of things would not have happened in this country if it wasn’t for this programme because you can’t have 3,000-plus people out there.”

“I want publicly to thank SIDF for its contribution,” said Mr Newton. “The contribution of the SIDF has been not insignificant. It has been considerable and it has touched the lives of all of you here.”

The PEP Management Committee Chairman sent out notice to persons who only come to the programme and do two hours a day and they go home but they end up sending in time sheets showing more hours of work.

He said such persons did not understand the value of the programme. He noted that those supervisors and facilitators who encourage that kind of behaviour should take a second look at themselves and understand what it was they were engaged to do.

“The SIDF, their investment in this initiative has been very considerable,” said Mr Newton in conclusion. “It is in all interest to safeguard that interest by ensuring that we work for an honest day’s pay, those of us who are getting paid, and to ensure that those of us who we supervise continue to work to earn their pay.”