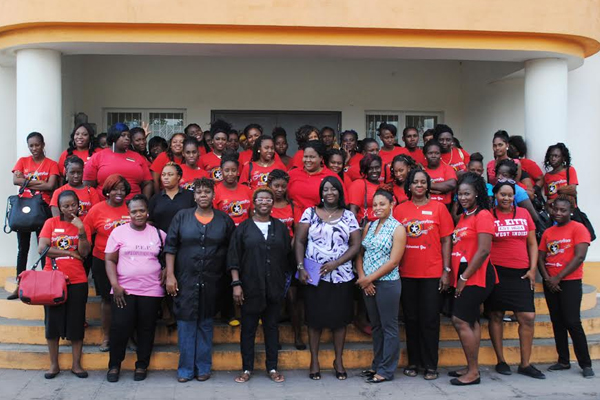 PEP participants say their counsellor is an Angel of Light

Basseterre, St. Kitts — Several hours before Prime Minister the Rt Hon Dr Denzil Douglas put cheers in the pockets of public workers with the awarding of double salary on Tuesday December 9, a People Employment Programme (PEP) group had put cheers in the hearts of residents of Newtown with renditions of melodious Christmas carols.

Students at the PEP School of Cosmetology along with their four facilitators were led in singing of Christmas carols Tuesday morning for a nearly thirty-minute session outside the Newtown Community Centre by Pastor Marcia Dyer-John of the Faith Tabernacle Church in Basseterre.

“Our neighbours here in Newtown know that as cosmetologists we cut hair and we cut nails,” announced Senior Facilitator, Ms Juliette Queeley, at the end of the carol-singing session. “But this was our humble way of letting our neighbours know that we are Christ-filled and hence the reason we shared the joy of Christmas with them.”

The four groups of trainees doing the advanced stage of their cosmetology training (under facilitators Ms Juliette Queeley, Mrs Amoy Arache, Ms Petra Newton, and Ms Tenesha Garroden) usually hold their morning assembly in the community centre, but on Tuesday they wanted to have the message of the joy of Christmas to reach out to their neighbours.

According to Ms Queeley, Pastor John came into their lives earlier this year and her involvement with the group has left an indelible mark in the lives of not only the students, but of the facilitators as well. Pastor John was introduced to them by Sister Leone James who earlier used to do counselling to the students.

“Sister James was volunteering her services but when she got a calling to do something else, she realised that she could not leave us like that,” explained Ms Queeley. “That is when we were connected to Pastor John by Sister James.

“Since Pastor John got on board, she has really been a positive force – a spiritual force of course. She gives unconditional love. Her love is unlimited. She comes, she counsels, she prays with us, and she commits herself voluntarily twice a week. She comes on Tuesdays and Thursdays.”

Pastor John holds assembly with all the four groups at the Newtown Community Centre and when need be, she sees the students (all females) on an individual basis. This has made the load much lighter for the facilitators as Pastor John handles all the difficult situations the students are going through, even outside the training centre.

“We have become like family now and we look forward to her comings,” observed Ms Queeley. “Pastor John, just like Sister James before her does this work pro bono. Okay, since she is not a lawyer, let me put it that she does it free of charge. Nobody pays her a single cent. She is an Angel of Light, and we describe her as a Woman with a Mission.”

A talk with Pastor Marcia Dyer-John revealed that she is indeed a woman with a mission, who in her counselling tells the vibrant PEP participants that are now getting ready to go out to work as qualified cosmetologists that bad attitude, something that is common among young people, is like a flat tyre.

“First I had to speak to them what is attitude,” said Pastor John when asked what was her main challenge. “A bad attitude is like a flat tyre. You cannot go anywhere unless you change it. That is the main thing, in attitude, behaviour, and there is a lot of disrespect for each other. So I work with them on self-discipline, self-respect, and self-worth.”

A number of the PEP participants in the Cosmetology Class see her not just as a spiritual guide, but as a mother. She revealed that she has ‘adopted’ two of the students as her daughters.

Since they are about to go into employment, or even open their own businesses now that they are well equipped, Pastor John has been talking to them on how to carry themselves when conducting such businesses. She dwells on the manner of dressing, and tells them that how they dress is certainly how they will be addressed by clients and the general public.

“One of the things that I say to them, I tell them it is a privilege to be in the position they are in,” noted Pastor John. “I tell them there is nowhere in the Caribbean that you get paid to study. So I do bring out that point to them, and I think PEP is a really good programme. I really have to commend the government of St. Kitts and Nevis for this.”

“I am an encourager, I am a motivator, and one of the things that I keep saying to them is ‘what do you want to become?’” pointed out Pastor John. “Since you are into cosmetology you have got to watch your appearance, self-image, and self-worth. What I offer is not just spiritual but holistic teaching, and I would say that I have made an impact in their lives.”