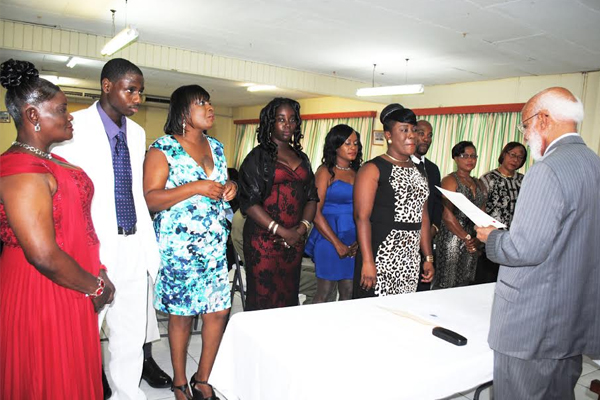 Basseterre, St. Kitts — The fight against crime in the Federation of St. Kitts and Nevis received a shot in the arm on Tuesday February 10, when 34 individuals were sworn in as Island Constables by the Governor General, His Excellency Sir Edmund Lawrence.

At a colourful ceremony held at the Police Training Complex in New Town, the People Employment Programme (PEP) contribution to law and order was highlighted as six of the new Island Constable are former PEP participants, who according to Commandant of the Training School, Supt Lionel Moore, have now been assimilated in the Police Force.

Welcoming the new Island Constables to the Royal St. Christopher and Nevis Police Force, Commissioner of Police, Mr Celvin G. Walwyn advised them that it was of utmost importance they understood that they had police powers after the Governor General would have signed their instruments of appointment.

“The reason for this is because some of us forget that we are human, and that people are human too, and our ego has a way of getting involved and before we know it, we are in trouble.”

Others graduating as Island Constables came from the Ross University School of Veterinary Medicine, Urban Development Corporation, St. Christopher Air and Sea Ports Authority, A+ Security from Nevis, Department of Tourism, and the Government Headquarters.

Commandant of Police Training Complex Supt. Lionel Moore noted that it was the first time the Island Constable Programme had participants from Nevis. Three persons, Mr Kapil Manners, Ms Collette Anderson-Wallace, and Romaine Woodely of A+ Security were sworn in as Island Constables. They were accompanied by a director of the company, Mrs Marion Lescott.

“A+ Security is a private security company who really and truly want to partner with us to be part of the Island Constable Programme,” noted Supt Moore. “We look forward for more persons coming from Nevis to support us, as we try to ensure safety and security.”

Addressing the new Island Constables, Supt Moore said: “From today onwards you have the powers as police officers and we expect that you partner with us so at least we can fight crime and violence in our society. I will depend on you as our eyes and ears outside there, so you can see and bring perpetrators to justice so we can make our Federation a much more safer place.”

Master of Ceremonies was Inspector Lyndon David, Public Relations Officer of the Royal St. Christopher and Nevis Police Force, who said that PEP’s participation in the entire police programme benefitted the force, as it gave regular police officers more time to be on the streets.

PEP participant Ms Paulette Roberts said that she joined PEP in March 2013 and was posted to work at the Stapleton Police Station, where she mainly did clerical work but would also go out on regular police duties accompanied by members of the regular police. She has now been transferred to the Police Headquarters in the newly created Internal Affairs office.

“I went to PEP and they put me there, I am very grateful for it. I guess they saw the potential in me, and they were right,” said Ms Roberts. “I am very happy because PEP gave me a good opportunity to start out something good in life, because back then I did not know anything about policing so I am very happy for PEP because they gave me a good start in life.”