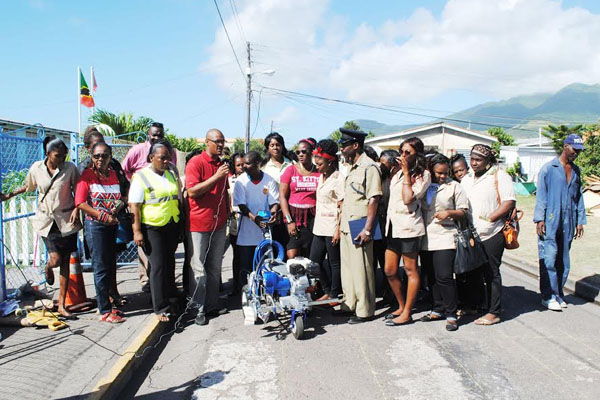 Basseterre, St. Kitts — People Employment Programme’s Road Safety project got off to a flying start on the morning of Friday January 16th when markings on the pedestrian crossing on the road outside the Tucker Clarke Primary School in Newtown were repainted in under eight minutes.

“This morning we are delighted to be at the Tucker Clarke Primary School from the People Employment Programme,” said Mr Geoffrey Hanley, PEP Project Director. Joining him were the Head of Traffic Department, Inspector Carl Caines who was accompanied by PEP Traffic Warden Ms Odessa Lewis, and the Headmaster of the school Mr Sylvester Charles.

“In December we would have presented a Field Lazer S200 road marking piece of devise to the Traffic Department to help with the road markings,” observed Mr Hanley. “We have chosen the Tucker Clarke Primary School to be the first school and the first pedestrian crossing to be repainted.”

According to Mr Hanley, the People Employment Programme has embarked on the PEP Road Safety project which will see them erect speed bumps at all the schools in St. Kitts and residential areas. With the new road marking machine they will repaint all the markings.

“We are going to be doing all of the street markings to ensure that they are visible so that it can help not only the pedestrians, but the vehicular traffic to avoid them being ticketed, knowing that they would be not permitted to park on restricted areas,” explained Mr Hanley. “So this morning we are happy to be at the Tucker Clarke Primary School, commissioning this road marking equipment.”

The event was witnessed by scores of the Newtown Community Centre-based PEP School of Cosmetology students, along with two of their facilitators, Mrs Amoy Arache and Ms Petra Newton, and PEP Monitoring Officer Ms Shirley Adams.

Head of Traffic Department, the Royal St. Christopher and Nevis Police Force, Inspector Carl Caines, said he was happy to see the start of pedestrian crossings repainting using the new Field Lazer S200 professional field marking machine that was given to his department by PEP, and which started at the Tucker Clarke Primary School.

He guaranteed that the process would continue and cover all the schools, including pedestrian crossings in the commercial and residential areas. At the end of the exercise, all road markings will be bright to attract the attention of pedestrians and motorists at the same time.

“I want to appeal to the drivers to observe the speed limits in the school zones, the residential areas, observe the pedestrian crossings and take care of our children,” said Inspector Caines. “Speed is not the answer. Speeds do kill and we request that you do not speed because the life you save might be your very own or your child, or somebody close to you.”

Inspector Caines observed that his department has a good working relationship with the People Employment Programme and thanked its Project Director Mr Geoffrey Hanley for being proactive especially as it related to providing PEP workers who have been working professionally in the Traffic Department.

Headmaster of the Tucker Clarke Primary School Mr Sylvester Charles put it on record that he was delighted that the People Employment Programme and the Traffic Department had chosen his school to start this very important safety project for the country’s children at all schools.

Saying that safety of the children on the roads is paramount in the delivery of education, Mr Charles added that he was also delighted by the fact that apart from the erection of speed bumps and repainting of the road marking, the road outside the school entrance had been made a one-way traffic zone which adds to the safety of the children.

“So I would like to thank the People Employment Programme for once again delivering for the children of the Federation and for the Tucker Clarke Primary School in particular,” said Mr Charles. “I think that the staff and parents and students are all elated that this project has come at this time and it is at an opportune time because we know that the roads are now congested with vehicles.”