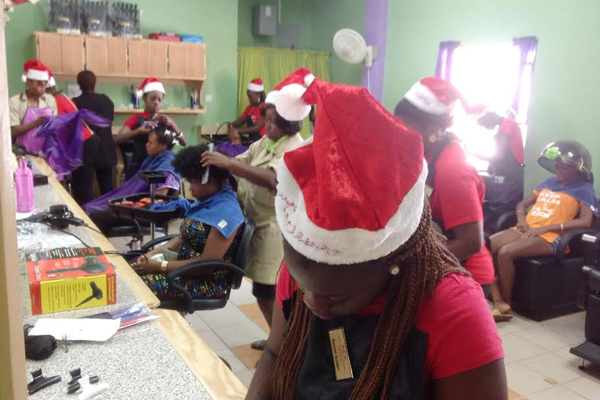 Basseterre, St. Kitts — Tenets of good neighbourliness came into play in the period December 10 to December 16 as residents of Newtown were afforded free hair-do and styling, manicures and pedicures by students of the PEP School of Cosmetology which is housed at the Newtown Community Centre.

“This week we at the PEP School of Cosmetology decided to give something back to the community, and we did that in a form of our services,” said Ms Juliette Queeley, Senior People Employment Programme (PEP) Facilitator for Cosmetology.

“While we were giving something back to the community, we were also benefitting because the students were able to practise their skills on the willing co-operators. We invited our neighbours to come and be pampered, as this is the Christmas time to give and share and make everyone happy. This was our way of reaching out. The services were free, and were all performed by the students, and they were just supervised by the facilitators.”

The People Employment Programme (PEP) was launched in December 2012 by the Prime Minister the Rt Hon Dr Denzil Douglas and was mandated to prepare unemployed young persons for the world of work through training or work attachments, and all PEP participants were paid the minimum wage as they trained.

At the beginning of last year (2013) there were four training sites for cosmetology which were mainly subscribed by females. The training sites were at the Newtown Community Centre, St. Pauls, Greenlands, and Rosemary Lane Basseterre.

But with the opening of the PEP School of Cosmetology and Salon at the Newtown Community Centre in November 2013, a function that was performed by the Deputy Prime Minister the Hon Dr Earl Asim Martin, who is also the area parliamentary representative, all the cosmetology training groups were relocated to the community centre.

Neighbours at Newtown have been seeing the young and enthusiastic females train under facilitators Ms Juliette Queeley, Mrs Amoy Arache, Ms Petra Newton, and Ms Tenesha Garroden. These include households, the Newtown Health and Dental Centres, the Tucker Clarke Primary School, and Police Training Complex among others in the Pond Site area.

According to Ms Queeley, all the neighbours were informed of the ‘Open House’ sessions and indeed when they opened on Wednesday December 10, among the first persons to come to the community centre were staff from the Newtown Health Centre, led by Community Nurse Manager, Mrs Velma Brookes.

Word spread fast, and the trainees were therefore not surprised when a contingent of women officers of the St. Kitts and Nevis Defence Force came to the community centre on Friday December 12. An average of 25 persons was seen each day in the period Wednesday to Monday (with the exception of Saturday and Saturday).

“The trainees really enjoyed it because we had a proper salon setting,” explained Ms Queeley. “We were very strict with everything they did, because we made sure that everything was done as they would have learnt. They enjoyed for the fact that they were going from one client to the next.

“They enjoyed also the remarks that they got because the clients got an opportunity to write a little note, talking about their experience, so they quite enjoyed the exercise.”

When Mrs Velma Brookes, Community Nurse Manager, at Newtown Health Centre came on Wednesday December 10, she wanted to have her nails done, while those accompanying her, Nursing Assistants Ms Natasha Richards, and Ms Marylyn Pemberton, also wanted to have manicure and pedicure done, and their hair as well.

“We have a very good working relationship with the students at the PEP School of Cosmetology,” said Mrs Brookes. “They come by us (at the Health Centre) daily for the heating of their meals, and we also have some who attend ante natal clinics, those who are pregnant and family planning as well.

“I think they have come a long way. We are very proud of them, and I have seen their improvement even in the way they carry themselves, so that has been really good to see. I am having my nails done today and I am confident that they will do a good job in pedicure and manicure.”

The students had named the salon ‘Unique Touch Beauty Spa’ where visitors were received in the most professional manner. One of the students Ms Tireney Herbert said that the experience they had was awesome, adding that she found it much better working with real clients as opposed to the mannequins they use in their training.

“You get feedback from the clients,” said Ms Herbert. “You ask them different questions and they answer and tell you how they feel, and when you know your client feels good, as a cosmetologist it makes you feel even better to know that you are doing something for a greater good.”

PEP’s Training Coordinator, Mrs Celia Christopher, who also patronised the Open House sessions pointed out that since the PEP was designed to impart knowledge and skills to the trainees, so that they could become more marketable and employable, the event at the Newtown Community Centre was proof that the programme had fulfilled its mandate.

“We have created a pool of cosmetologists because as you think long term, you will be able to make the linkages in the tourism industry and based on what is happening over in the Peninsula, where these services are going to be required, I want to wish them well,” said Mrs Christopher.

“We are forever indebted to the people and government of St. Kitts and Nevis, because they could not have achieved this without the support of the government, the community, their families, their facilitators and the PEP Secretariat itself. We have all worked together to achieve what you have seen today, and I am very proud of it.”

Did anyone miss out the free sessions at the PEP School of Cosmetology’s Open House? Hold on, assured Senior Facilitator Ms Juliette Queeley. When the trainees return in the New Year, more Open House sessions will be held and the public will be aptly advised.