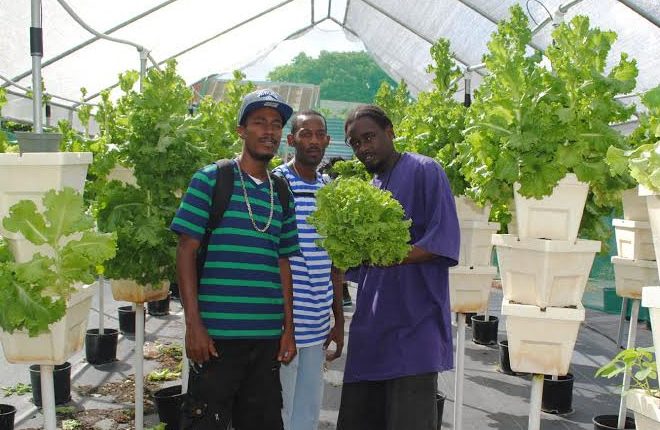 Basseterre, St. Kitts — The McKnight area has young men of good standing. But overcoming stereotypes that nothing good comes out of McKnight has been a tall order for 12 dedicated young men who have been engaged in hydroponics.

It all started when over three years ago a group of 53 young men teamed up and mandated themselves with the task of decreasing the importation of foods and increase food security in the nation. That saw the birth of Kittitian Home Grown (KHG).

KHG’s CEO Mr Brian Griffin added that “along with it we wanted to encourage the young men in our community to get together and involve themselves in progressive things and into farming, particularly into this kind of farming.”

The group is still in operation and its members are doing wonders. According to their coordinator, Mr Leroy Greene, a non-governmental organisation (NGO) Student Technical Entrepreneurial Programme (STEP), stepped in to assist them with the Ministry of Education providing them with land next to the old Education Department office in McKnight.

“STEP selected them from their community right here in McKnight and that is how they formed Kittitian Home Grown,” said Mr Greene. “Initially there were 53 young men and we are now down to 12. These are the most interested 12 out of the 53.

“We had a period of training of between six to eight months, and guys who exhibited interest in what they learnt and interest in farming stayed on while some people were not interested and so these are the committed 12.”

One of the senior members of the group, Mr Chad Williams, noted that when the STEP Foundation ran into some problems, group members reached out to the People Employment Programme (PEP) through its field officer Mr Jason McKoy.

PEP liked the undertaking as it was one that was not only training young people, but was also contributing to the economy as they produced vegetables. Mr McKoy notes that this was finalised in March 2013 and Mr Greene was enlisted by PEP as a coordinator for its Agri-Enterprise Training and Management (ATM) component, with a focus on hydroponics.

According to Mr McKoy, by the time PEP stepped in, there were 25 members. PEP assisted them by purchasing more equipment and material for use, and all the members were absorbed as PEP participants, meaning that they were being paid minimum weekly wages.

“The training aspect of the group’s activities was its selling point,” he observed. “The young men, whose number has dwindled to 12, are now properly trained and to add to it, they are training others. They are in a position to be weaned off PEP and venture out on their own, but there are some difficulties facing them and hence the reason they are still on PEP.”

Before PEP stepped in, Mr Griffin observed that some of the guys would go without pay because they had not gotten a foothold in the market meaning that the little they sold did not bring enough income. They also had to deal with acts of vandalism of property and theft of produce by unknown persons.

“PEP came in and looked after vandalism we had, helped us replace material and we were able to get the farm back on track,” said Mr Griffin. “Apart from the material, and salaries, we learnt life skills, money management and were even taught how to use computers, and we learnt about our health, and conflict resolution which is very important in this area.”

According to Mr Griffin, they are still being faced by vandalism where people come in and sabotage by bursting pipes, while free-roaming goats come in the compound and destroy crops. Other problems include theft of produce, and they also face new pests.

“The little that we make goes back to replace the vandalised equipment,” observed Mr Griffin. “That is why we cried out and PEP came in and gave us some money and additional assistance including our salaries.”

The group sells its produce to high end restaurants and supermarkets, and they also encourage people to walk in and buy from them. They also give food to the elderly people, a soup kitchen on Bay Road, pre-schools in the neighbourhood, the hospital, children’s home, the Cardin Home, and even the prison.

According to Mr Greene, the 12 participants along with him are grateful to Mr Jason McKoy and the people at PEP for proving the young people of McKnight with the opportunity bring food security to the country.

“They can tell you that they are hydroponic experts because basically this was the pioneer plant in St. Kitts,” said Mr Green. “These guys built the plant from scratch, they manage the plant, they repair it and we have a number of skills in the people here between them. We are looking for the continued support of the PEP, the community and the country in fact to keep this programme going and to keep these young men feeling good about the programme.”

He pointed out that the participants set up the hydroponic farm at the School Feeding Programme at Needsmust, trained the personnel there and handed it over to the people at School Meals. They will be involved in restoring the hydroponic farm at Project Strong which was destroyed last year by a tropical storm, and they teach school children who come to visit, “because one of the remits which we have is to teach this new way of agriculture to the school children.”

KHG member, Mr Chad Williams closed by saying, “We are going to put the country on the map…” while Mr Brian Griffin said: “If there is no farm, there is no food.”

DIGICEL Partners With Sugar Mas as a Platinum Sponsor