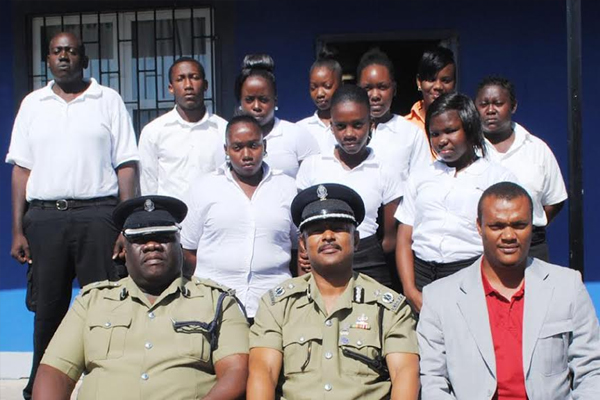 Basseterre, St. Kitts — Project Manager for the People Employment Programme (PEP) Mr Geoffrey Hanley is saying that the programme’s partnership with the Royal St. Christopher and Nevis Police Force is paying dividends to the youth of the Federation.

Mr Hanley made the remarks on Monday March 24 at the Police Training School where eleven members of the PEP Tourist Patrol Officers joined other members of the security agencies for a three-week Island Constable Course.

“What we have here this morning is a number of the PEP participants who originally signed up to be Tourist Patrol Officers who are going to officially train for a period of three weeks which would certify them as Island Constables and continue working in the Tourist Patrol Unit under the auspices of the Police Force,” said Mr Hanley.

“We are hoping that this is just a start for a brighter future for them, where then they would graduate from being Tourist Patrol Officers into the actual fully fledged Police Force. Of course it is a heart warming situation at the PEP Secretariat, because we are yet able to partner with the Police Force in another area, after Traffic Wardens.”

Mr Hanley added that at the PEP Secretariat they are excited about this opportunity and noted that he was quite certain that the opportunity will open the door for many other PEP participants to get an opportunity of that nature.

According to Supt Moore, other participants in the Island Constable Course are drawn from the Ross University, St. Christopher Air and Sea Ports Authority, the Urban Development Corporation (Port Zante), and the New Horizon Rehabilitation Centre.

Before he left for his official duties, Commissioner Walwyn had stated that more people will be trained as the intention is to have a total of about 300 Island Constables by the end of the year.

“These PEP people will be police officers but under the Island Constable Programme and within a year when we start recruiting people for the regular police force they will be the first ones that we will look at to assimilate into the regular police force,” said the Police Commissioner. “I am cautious in using the word ‘regular’ because Island Constables are police officers. They have full arrest authority when they are working.

“With these PEP people after about a year, those that are productive we will bring them over, because people are always retiring and as they retire, we will have to go out and find people…. these PEP people will get in.”