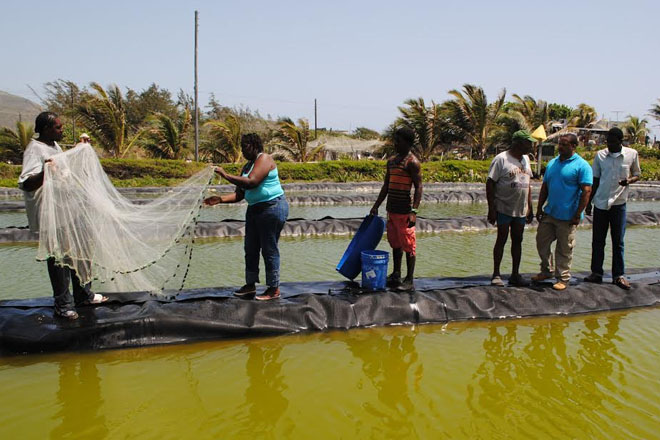 Basseterre, St. Kitts — The St. Kitts and Nevis Aquaculture Pilot Project and Environmental Research (SNAPPER) has partnered with the People Employment Programme (PEP) and has successfully exposed young Kittitians to the intricacies of growing tilapia, a fresh water fish, in salt water ponds at Conaree.

Six PEP trainees were attached to the Snapper Fish Farm, as it is popularly referred to, late 2013 where according to the CEO of SNAPPER Dr Barrington Brown they have been exposed to specifics of aquaculture even though some of them did not have the specific backgrounds in physics and chemistry.

Aquaculture is a four-year course according to Dr Brown, and it would be expected that the students would have basic subjects. However, when they were brought by PEP he did subsequent interviews and only one, Mr Lianthonio Williams, had something that they could build on, and having proved himself, he was indeed made a supervisor.

“We have tried to use what we call applied sciences by demonstration and so on and they are encouraged to do the tours and they have regular classes so we have to do things like presentation skills and professional guiding,” explained Dr Brown.

“They are now down to four, as two would have left to go to areas of different disciplines. These remaining four PEP students have more technology than all the experts in aquaculture in this country.”

Dr Brown observed that while they won’t understand the depth of what pH balance is, like acidity and alkalinity, the applied science they have soaked in since their attachment at SNAPPER puts them way ahead and he confirmed that they can run such a farm anywhere.

“They have been exposed and I would be very happy if they took more of an opportunity to use this facility to further themselves, because aquaculture is rather new and a lot of people do not see the future where it is going,” commented Dr Browne.

“All industrialised countries are into aquaculture in a very big way, and government has promised to give us four acres to the north of this project, which means twenty ponds and we will need trained people to manage those ponds. We do not have to take people from outside, so there is a facility for them to grow in the industry.”

The PEP students have learnt the whole subject of fish farming, reproduction, feeding and nutrition, and have gained immensely due to the fact that SNAPPER has a relationship with the Ross University School of Veterinary Medicine whose personnel come in and take fish for toxicology tests.

“We are talking about sending Williams to Ghana in Africa,” said Dr Browne. “The trustee who is attached to this project Mr Donald Roberts is taking care of all the details. In Africa they want him to work on a project.

“He will be teaching them how to grow tilapia fish in salt water. It is not just salt water we are doing here, we have covered all the grass so you not need to use a weed-eater; all of those techniques he (Roberts) wants him to do out there in Africa.”

As for the future of the PEP trainees at SNAPPER, Dr Brown confirmed that they will know more about aquaculture than anybody else coming in at the entry level. He has been working directly with the Department of Marine Resource who would in turn handle the employment side of it.

“We have the Chief Fisheries Officer Mr Samuel Hyliger who is attached to this project, and they also have a pond here to monitor to see what the people are doing is up to United Nation’s fisher programme standard,” said Dr Browne.

“PEP has been more than helpful for these young people, but we need a little more in support, because I am even asking for things like paper and ink as we have classes and we do a lot of hand outs and you can imagine aquaculture is very deep, I take things off the internet, because they need to have this kind of background information.”

While he is yet to be informed when he would be travelling to Ghana, in West Africa, PEP student and now supervisor at SNAPPER Mr Lianthonio Williams is excited at the prospect of travelling to Africa and has promised to represent St. Kitts and Nevis is the best possible way.

“With the experience I have gained here at SNAPPER I could develop aquaculture farms in St. Kitts and Nevis,” explained Mr Williams. “I have always had a passion for challenge and for me to do something that will help to develop our economy; it is something that I am looking forward to.”