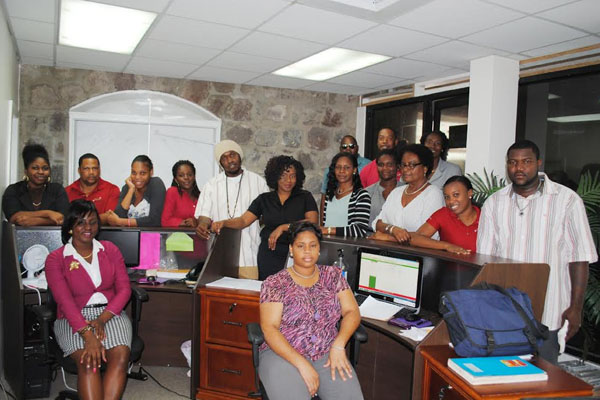 Basseterre, St. Kitts — The People Employment Programme’s (PEP) Secretariat has moved from Dorset Village to downtown Basseterre on Church Street, and Project Manager Mr Geoffrey Hanley is pleased with the renovation work done by PEP participants who made the new offices habitable.

According to Mr Hanley, the People Employment Programme has successfully served the people of the Federation of St. Kitts and Nevis for a period of two years now, and to make it a more sustainable programme it was felt that there was need for it to be more accessible to members of the public.

The availability of office space directly opposite the Government Headquarters was made possible following the relocation of the Department of Education, which previously occupied the same offices, to the Stanford Building at the Robert L. Bradshaw International Airport occasioned by the fact the building had moulds that rendered it uninhabitable.

To make the offices habitable, a local contractor Mr Elbert Pemberton was given the job by PEP to renovate the offices and clean them by removing all the moulds. Mr Pemberton made use of four women PEP participants in the Women in Construction Trades (WICT), which is a component of PEP, and four male PEP participants.

“The People Employment Programme has been in existence now for two years, and with everything you must be able to make adjustments here and there, and one of the major adjustments we would have decided to do was to relocate the PEP offices,” stated Mr Hanley.

“We were grateful to have been housed in the Dorset region and we thought because of the fact that we would have trained quite a number of young people in various skills, specifically in carpentry, in tiling, and in construction, we put out our PEP participants to the task of renovating the building that once housed the Education Department.”

The building that houses the new PEP Secretariat is according to Mr Hanley a historical one as it once was known as the Blakeney Hotel, one of the earliest establishments in St. Kitts and Nevis’ push for a piece of the pie in the tourism industry, and for a while it played host to the Central Bank.

“What I like most about the renovation work is the fact that the natural walls are now being exposed,” comment Mr Hanley. “In the previous building they were hidden with sheet rock and dry wall partitions.

“But we are concerned about our staff health and wellbeing, and we wanted to be in a natural environment so any excess material we would have taken them down – it is a complete gutted out building, new tiles and all of the works were done by the participants in the programme.”

PEP staff started moving on Thursday November 27, and the office was open for business to members of the public as from Monday December 1. The fact that PEP workers under the supervision of the contractor, Mr Elbert Pemberton, were able to accomplish that feat, Mr Hanley said that PEP had clearly achieved its mandate to train young people.

According to Mr Pemberton, who only brought one skilled person, the work was hard for the PEP workers who had to go through his tough work conditions, but at the end of it all they have said to him that they now appreciate why he appeared to be tough to them, because they have learnt a lot.

“At first they said they did not understand how I speak to them,” explained Mr Pemberton. “But since the work had to be done, and with persistence every minute I encouraged them, giving them a reminder to do this and to do that. Now they are trying to get around, and they are seeing the reason why I was doing all of that.”

“I have gained a lot more experience,” said Ms Tiandra Browne, a member of PEP’s Women in Construction Trades (WICT). “I have learnt how to cut flexi-glass and I learnt how to plaster the wall and put plywood on the floor and I also know how to lay the tiles. I can also do painting jobs.

“This is the first time I was able to do a full scale job, and from the experience I have gained, and depending on the kind job, I can now go on a job site and work independently without having to rely so much on my supervisor, and I thank PEP for giving me that opportunity.”