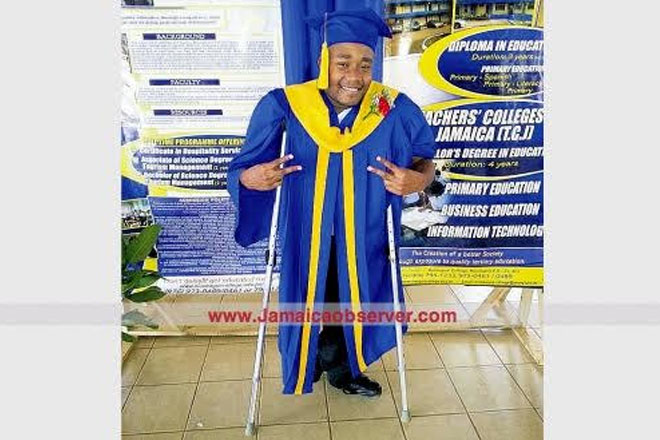 (Jamaica Observer) THERE were loud cheers for Clifford ‘Narado’ Clarke as he ascended the steps of the Gloria Johnson Multipurpose Building at the Moneague College recently to collect his Bachelors in Business Administration, Human Resource Management major.

His batchmates and members of the audience attending the college’s graduation ceremony were visibly impressed that Clarke did not allow his disability to prevent him from achieving his goal.

A very confident Clarke climbed the stairs with the aid of the crutches he uses to get around, to receive the evidence of his accomplishment from principal Howard Isaacs.

The 25-year-old Clarke, who does not thrive on self-pity, says he has never seen his disability as a deterrent to success as he believes there will be challenges in life, but if persons keep focused, they will achieve thier goals. “I hate when persons pity themselves.

Clarke was diagnosed with Spina bifida at birth and as a result moves around with the use of crutches.

Being physically challenged, the journey in college was not a smooth sailing one, however, he was determined to succeed. His recent success is only the beginning of the journey for him. Clarke has committed to reading for his doctoral degree before age 40 and intends on owning his own business.

While he works to accomplish those goals, he is happy that he has received his degree. “It’s overwhelming because when I just started I was just here to do the associate,” explained an ecstatic Clarke.

He explained that when he found out he could do the degree programme he immediately went for it. “There were ups and downs.

For example whenever it rains, it was hard to go to classes,” he said, adding that having to depend on crutches meant he was unable to hold an umbrella to shelter from the rain. But, determined to succeed, Clarke said he made the best of it.

Clarke said living on campus made the experience more comfortable since he was able to rest between classes.

The optimistic young man said reflecting on his life from birth he realises that “there are going to be a number of challenges in your endeavours if you keep focused on what you want to achieve you will be successful. You will be discouraged at times but just be optimistic that the end result will be beneficial to you”.

During his tenure at Moneague College, Clarke was not only focused on academics, but was involved in other areas. He was chief executive officer for his entrepreneurial group, Visiones Equis Manufacturing Company limited, which produced and sold laptop sleeves.

The Kiwanian was treasurer for the student council body and was also a member of the University and Colleges Christian Fellowship, where he also served as treasurer.

Clarke, who hails from Glasgow, St Ann, was also a student staff member for the accommodations department, where he has been employed since completing his studies.

As he celebrates his success, Clarke said his family has been a strong support.

“My family is my cornerstone, my parents specifically,” he said. He also added that his aunt was very instrumental in his journey through college. “My Aunt Juliet took me under her wings through college. I would never be out of anything once she was around,” he said.

The young man is now committed to accomplishing his other dreams in life and remains focused on the task at hand.