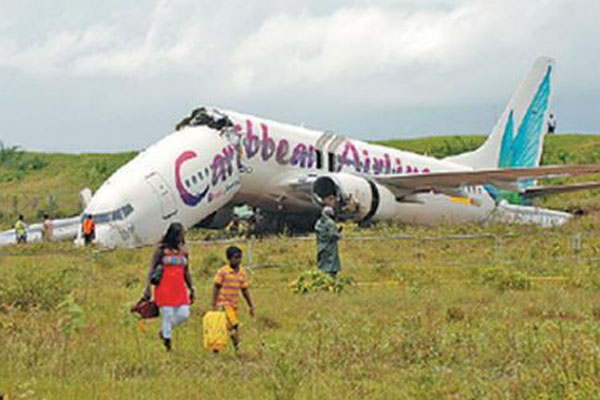 Port of Spain, Trinidad — A Caribbean Airlines (CAL) aircraft crashed at the Cheddi Jagan International Airport (CJIA) in Guyana in 2011 because of a number of factors, including a lack of effective communication in the cockpit, an official report released in the South American country has said.

CAL said on Friday the captain of the Boeing 737 flight remains employed as a first officer.

The former first officer left the airline in 2012.

A CMC report out of Georgetown said on Friday that country’s Ministry of public works said it hoped the findings into the July 30 crash of the Boeing 737-800 with 157 passengers and a six-member crew on board, will aid in preventing aircraft accidents.

No one was killed in the accident, but eight passengers last July filed lawsuits claiming a total of GUY$8 million (One Guyana dollar = US$0.004 cents).

A statement by the Government Information Agency (GINA) quoted the report of the investigation as indicating that the crew of flight BW523 did not command maximum brake pressure of 3,000psi until the aircraft was 250 feet away from the end of the runway, CMC reported.

Lead investigator Paula McAdam said this led to the conclusion that under the event conditions, the aircraft could have been brought to a safe stop on the remaining pavement if maximum braking pressure had been applied.

Another probable cause for the accident was that the aircraft touched down at approximately 4,700 feet beyond the runway threshold some 2,700 feet from the end of the runway.

As a result of the captain maintaining excess power during the flare, and upon touching down, failure to utilise its full deceleration capacity resulted in the aircraft overrunning the remaining runway and fracturing the fuselage, CMC stated.

McAdam said the flight crew’s indecision as to the execution of a go-around, their failure to execute a go-around after the aircraft floated some distance down the runway and their diminished situational awareness contributed to the accident as well.

Other findings of the investigation include the increase of power by the pilot on short final to maintain glide path and did not considerably reduce power when crossing the runway threshold, CMC said.

“Based on the findings put together from information provided to the investigation team, the pilot’s failure to considerably reduce power resulted in the 4,700 ft touchdown,” GINA said, noting that immediately after the crash the pilot and the co-pilot were taken to the Georgetown Public Hospital Corporation (GPHC) where they successfully passed tests for alcohol and drugs.

The report said the wet runway surface did not inhibit the braking capacity of the aircraft and that the investigation team made recommendations to CAL and the Trinidad and Tobago Aviation Authority (TTCAA) as well as CJIA “to prevent aircraft accidents based on their findings.

“The investigation team suggested to TTCAA to carry out full review of the CAL flight and crew training programme to ensure it is in compliance with the Boeing programme,” GINA said, noting that a recommendation had been made to “CJIA to provide an easily identifiable area for the comfort to passengers and their relatives, who may be in distress during an emergency”.

“The incident investigation has been thorough and CAL has worked with the GCAA to uncover all the facts as they related to the incident. The airline appreciated the opportunity granted by the GCAA to make submissions during its investigation and respects its final conclusions.

The findings of the report reiterated that the captain was a veteran pilot and the first officer was experienced. CAL is committed to working with our flight crew to ensure they meet the required regulatory standards. The captain of flight BW523 remains employed by CAL as a first officer. The first officer of the flight left employment at CAL in 2012. All regulatory requirements vis-à-vis the crew were met following the event.”

CAL said it examined the findings of the report and has already incorporated all of the recommendations.

“Based on the report’s findings, CAL has re-emphasised the airline’s commitment to working with our flight crew to ensure their effectiveness. Additional training was also covered during initial and recurrent training for CAL’s pilots.”

With regard to legal actions, CAL said the majority of personal injury claims arising from the incident have been resolved.

“CAL cannot comment specifically on the findings of the report as there is litigation in respect to a few claims, pending in the United States,” it added.