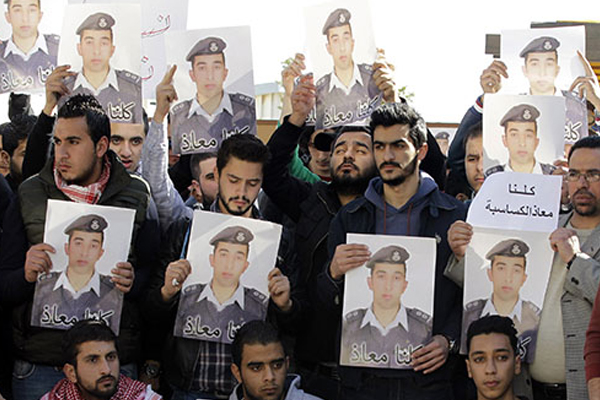 Amman, Jordan (AFP) — The burning alive of a Jordanian pilot by the Islamic State group has shocked and angered Jordanians, uniting them behind their government’s vow to intensify its military action against the jihadists.

Jordan is one of several Arab states to have joined the US-led campaign against IS in Syria and Iraq, and has taken part in air strikes against jihadist positions since September.

Concerns were raised at the time that an air war in the two countries, both of which share a border with Jordan, could impact security at home.

But the execution of airman Maaz al-Kassasbeh in a gruesome video released Tuesday “will prompt more Jordanians to get behind their army” and demand revenge for the pilot’s death, analyst Mohammad Abu Remman said.

Kassasbeh’s murder has even prompted speculation the kingdom may prepare ground troops to confront IS.

In a statement Wednesday, King Abdullah II vowed a “severe” response, saying “the blood of martyr Maaz al-Kassasbeh will not be in vain”.

In the video, a man said to be Kassasbeh, dressed in an orange jumpsuit, is burned to death in a metal cage. A masked militant is seen lighting a trail of flame which eventually engulfs the pilot.

As news of the killing broke, Jordanians came out onto the streets to denounce Kassasbeh’s death and demanded revenge against IS.

His father Safi al-Kassasbeh, who belongs to an influential tribe, called for “very severe retaliation” against the jihadists.

State television showed a black banner with an image of the pilot while playing patriotic songs as well as programmes about the army.

“Today there is a broad consensus in Jordanian public opinion on the need for a war against (IS) and a firm response,” said Remman, a researcher at the University of Jordan’s Centre for Strategic Studies.

“Jordanians have realised for the first time since we’ve talked about the international coalition against IS that they are in a state of war,” he added.

Amman “could increase its participation in the coalition and ask to review the strategy it has adopted which is limited to air strikes,” said analyst Hassan Abu Haniyeh. “Jordan could consider a ground invasion.”

Jordan’s last military engagement in the region came in the 1973, when it sent soldiers to Syria as part of an Arab coalition against Israel in the Yom Kippur war.

While public support for the deployment of troops to Syria this time had been lacking, Kassasbeh’s death has changed how people see IS, according to political writer and columnist Labib Kamhawi.

“Jordanians are so angry and would strongly support any action that leads to strong retaliation,” he told AFP. “People want revenge.”

The authorities moved quickly to respond to the killing by executing two Iraqi jihadists who had been on death row, including would-be suicide bomber Sajida al-Rishawi.

IS had demanded her release in return for keeping Kassasbeh alive.

On Wednesday the Islamic Action Front, the political wing of Jordan’s Muslim Brotherhood which has opposed Amman’s participation in air strikes, criticised “the odious crime committed by the terrorist organisation” IS.

Large crowds gathered close to the capital’s international airport to welcome home King Abdullah, who cut short a visit to the United States after hearing of Kassasbeh’s murder.

Religious Affairs Minister Hayel Abdulhafiz called on citizens to pray for Kassasbeh in mosques throughout the kingdom.

His brutal death “will unite Jordanians… and will provide popular legitimacy to Jordan’s participation in the international coalition,” said political analyst and writer Fahd Khitan.