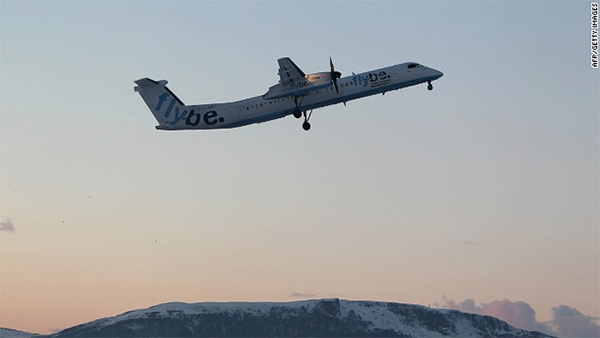 Pilot’s false arm falls off as he lands passenger plane

(CNN) — It’s probably one of the more unusual incidents air traffic investigators have looked into, but the good news is that when a pilot’s prosthetic arm fell off during landing, no one got hurt.

The 46-year-old pilot lost control in dark and windy conditions while bringing a Flybe airline turboprop plane with 47 passengers into Belfast City Airport in Northern Ireland.

A report released Thursday by Britain’s Air Accident Investigation Branch said the unnamed pilot’s false limb became detached as he performed a “flare manoeuver” in which the nose of the plane is raised.

The pilot managed to regain control and make a “heavy landing,” it said.

The February 12 incident resulted in no injuries among the passengers or four crew, but triggered an investigation.

“As he made the flare manoeuvre … his prosthetic limb became detached from the yoke clamp, depriving him of control of the aircraft,” the report said.

“He made a rapid assessment of the situation and considered alerting the co-pilot and instructing him to take control.”

However, it said, because the co-pilot would not have time to take stock of what was happening, he decided the best option was to continue one-handed.

“He did this, but with power still applied, and possibly a gust affecting the aircraft, a normal touchdown was followed by a bounce, from which the aircraft landed heavily.”

The report made no comment on the incident but concluded with the pilot’s own pledge to be “more cautious about checking the attachment on his prosthesis.”

It said he would also brief his co-pilots about the possibility of a similar event occurring in the future.

Flybe, a UK-based low cost airline, said it had carried out its own investigation and had put into place additional safety measures.

“Flybe is proud to be an equal opportunities employer,” it said in a statement.

“This, in common with most airlines, means we do employ staff with reduced physical abilities.

Where appropriate, and in accordance with UK Civil Aviation Authority requirements, this does include pilots.”

It said the pilot was a senior captain and one of its “most experienced and trusted” pilots.

“Following the incident, Flybe immediately undertook a detailed internal investigation from which it determined a series of additional fail-safe safety checks.

“These were rigorously tested and instigated immediately to ensure that this type of incident could not happen again.”