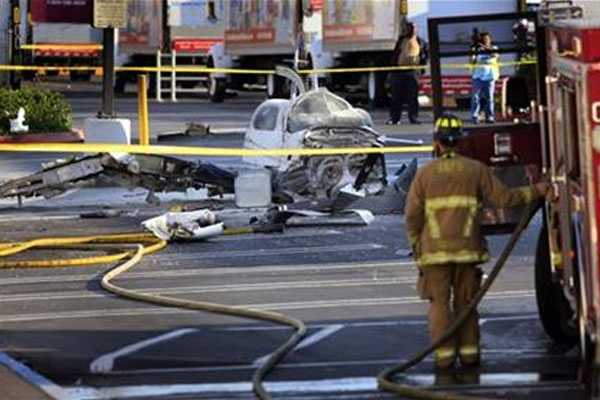 SAN DIEGO (AP) — A small plane crashed in a San Diego shopping center parking lot Wednesday, killing one woman on board and seriously injuring another, a fire spokesman said.

The single-engine 1988 Mooney M-20L went down around 5:30 pm. Wednesday in a parking lot that serves a Costco and a Target store in the Kearny Mesa neighbourhood.

The plane had bounced while landing at nearby Montgomerey Field, continued westbound and went down, said Ian Gregor, a spokesman for the Federal Aviation Administration.

The plane clipped the top of the Target store and knocked down a light pole, police Lt. Steve Behrendt said.

It spun around and finally landed in the parking lot in a loading dock area away from the main entrances, and no cars were there, city fire spokesman Lee Swanson said.

The plane caught fire, but the flames were quickly doused. He says the pilot, a 52-year-old woman, and her 80-year-old passenger were taken to hospitals with major injuries.

A man who tried to help after the crash was treated for minor cuts and burns.

Behrendt says one woman had serious burns and died at the hospital, but it’s not immediately clear whether it was the pilot or passenger.