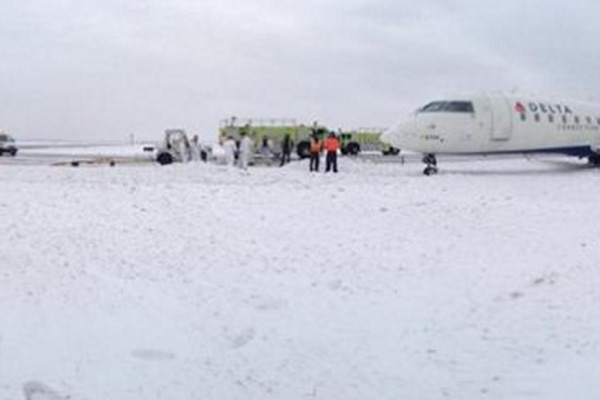 Plane slides off runway at JFK; no injuries

NEW YORK (AP) — A plane from Toronto slid into snow as it turned onto a taxiway after landing at John F Kennedy International Airport on Sunday, leading the airport to temporarily suspend flights from taking off and landing because of icy runways.

No injuries were reported after Delta Connection 4100 landed shortly after 8:00 am Federal Aviation Administration spokeswoman Kathleen Bergen said. The CRJ2 aircraft was turning off the runway onto a taxiway when it slid into the snow, she said.

The plane was then towed to a gate with passengers on board, she said.

The Port Authority of New York and New Jersey, which operates the airport, said 35 people were aboard the plane.

The airport suspended operations for domestic and international flights for about two hours because of slick runways, leaving passengers at crowded gates. Flights resumed after 10 a.m. on two of the airport’s four runways, but residual delays for passengers were expected.

The landing came two days after a major snowstorm dumped a half foot of snow in New York City, forcing the cancellation of hundreds of flights and stranding passengers both in the city and throughout the world who were heading to New York. Passengers from cancelled flights continued to fill the few remaining seats on many planes already crowded by holiday travellers.

Flights resumed after 10:00 am on two of the airport’s four runways, but residual delays for passengers were expected.