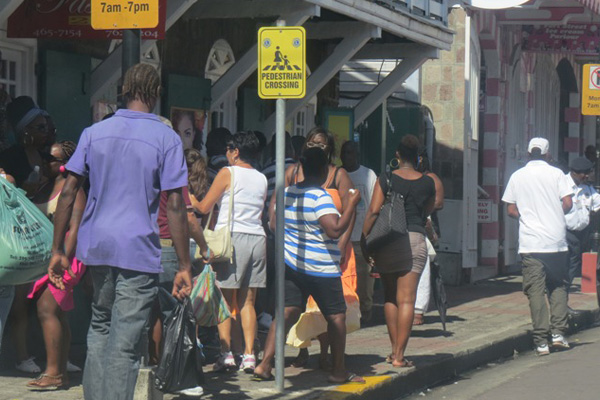 Basseterre, St. Kitts (CUOPM) — St. Kitts and Nevis’ Prime Minister the Rt. Hon. Dr. Denzil L. Douglas has made a public appeal to businesses in the Federation to have a conscience following reports that some of them were increasing the prices of several items exempted from VAT and Customs Duties.

.”This is not nice. This is terrible and I am making this public appeal to our businessmen not to do this because the government is going to police it and wherever it is found, we are going to do something about it,” said Prime Minister Douglas Tuesday on his weekly radio programme “Ask the Prime Minister.”

Several persons have complained that some businessmen have increased the prices of numerous items contained in the “Family Shopping List of Goods” announced by Prime Minister Douglas recently in an effort to reduce the cost of living as the economy of the country improves.

“It is wrong. I want to again appeal to all with their good senses to use it on behalf of advancing the cause of our people, especially those who are having it difficult and those who are our pensioners,” Dr. Douglas told listeners.

Earlier this month Prime Minister Douglas announced that “The Family Shopping List of Goods will now attract zero payment of import duty and the Value Added Tax upon import into the Federation.

He disclosed that the “Family Shopping List of Goods” is divided into three parts: Health and Hygiene; Balanced Diet, and Childcare and Education.

“The health and hygiene items that will be zero VAT-rated are: detergent, bleach, disinfectant, adult pampers, sanitary napkins, bathroom tissue, shampoo, mouthwash, body lotion, deodorant, toothpaste, soap, insecticides, rodenticides, and mosquito coils. Significantly, medicines in St. Kitts and Nevis are to be zero-rated for VAT. In other words, no VAT should ever be charged on medicines. Yet persons have reported that some pharmacists and other retailers have been charging VAT on medicines. This should not be, and any person who is charged VAT on medicines should both strongly protest to the retailer involved, as well as lodge a complaint with the Ministry of Consumer Affairs,” said Prime Minister Douglas.

The childcare and education items that will be zero VAT-rated are: fruit and vegetable infant juices; baby diapers; and exercise books.

“These concessions will be of direct benefit to us all. Now that our economy has stabilized, the Government is very pleased to be in a position to provide them,” Prime Minister Douglas said.

In 2010, St. Kitts and Nevis joined some 150 nations around the world which had already implemented the Value Added Tax.

It was essential to the stabilisation of the economy and it has contributed significantly to the very positive performance ratings that St. Kitts and Nevis has since received.

“The Government is now in a position to remove the VAT from certain items, and I am pleased to share with you today the “Family Shopping List of Goods” on which, from today forward, there will be zero VAT paid,” said Prime Minister Douglas.