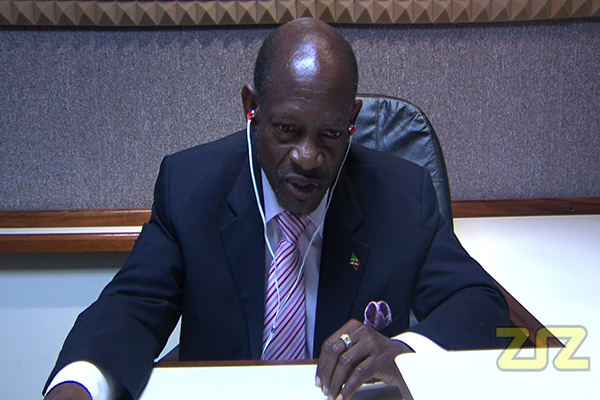 ZIZ News — Prime Minister, the Right. Hon. Dr. Denzil Douglas says while it is hard to ever know the true motivations behind the sometimes bewildering actions of the opposition coalition, it is clear that they are playing an elaborate game.

The Prime Minister, a 25-year parliamentarian, said that there was clearly no unity in a grouping that saw fit to push veteran statesmen and leaders of their respective parties in the background in favour of political ship jumper, Dr. Timothy Harris.

Dr. Douglas said having known some of the players involved, including Sam Condor, Premier Vance Amory and Mark Brantley; he did not believe they would allow themselves to be led by Timothy Harris.

“I happen to know all three players and I think it is a game. I don’t believe that Condor really will take the back seat to Harris because Condor knows Harris. I don’t believe that Amory will take a back seat to either Harris or Condor because I think they understand Amory and Amory understand them. So it’s a game. It is part of that game of trying to get rid of the Labour Party,” he explained.

Prime Minister Douglas added that in his belief, the game had been conceived in an attempt to oust the Labour Administration resulting in the strange alliance.

Douglas continued that he did not think the people of Nevis, who elected Vance Amory as Premier, would tolerate their leader taking a secondary role to Harris either. The Prime Minister suggested that Amory, a seasoned statesman himself, was allowing the younger, hastier politicians to conduct what he referred to as their ‘experiment’ whilst he remained focused on the big picture.

He noted, “I don’t believe that the people of Nevis want Amory to take a back seat to Harris, I don’t think so at all. And I don’t think that Amory is really taking a back seat to Harris…of course Mark Brantley is pushing and so Amory, I think at the moment, sees it fit to appear as if he’s been pushed out but Amory is not pushed out, Amory cannot be pushed out. I have been around Amory for 25 years; Amory is not an easy pushover.”