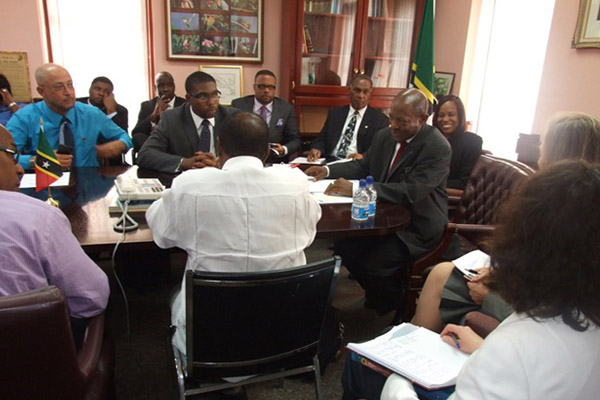 Basseterre, St. Kitts (CUOPM) — Despite the good economic reports on St. Kitts and Nevis from the regional and international financial institutions, there are those who will continue to scowl in the face of the twin-island Federation getting such commendations.

Prime Minister the Right Hon. Dr. Denzil L. Douglas during his Tuesday “Ask the Prime Minister” said there are those who will insist that this moment calls for shame – as opposed to gratitude and praise to the heavens.

Dr. Douglas noted that the Washington-based International Monetary Fund (IMF) in its recent Article IV Report issued yet another report on the Federation’s economic performance which stated that economic activity was up; inflation, low; the financial sector, stable and;  the fiscal and external positions improving.

“I don’t know who could be unhappy about this, but – on second thought – I can, indeed, think of a few,” said Prime Minister Douglas, who pointed out that the report stated that significant progress has been made to strengthen public financial management.”

“Our Fiscal Year 2014 Budget will keep our debt to GDP ratio on a downward trajectory.  (Good again)  We have shown significant advances in structural reforms. (Good),” said the Prime Minister.

He indicated that there are additional reforms that his government has proposed.

“The IMF supports us pushing forward with them since they would create public sector efficiencies and promote private sector growth.  (Good again). Also, because we understand the importance of regulation to sound economic management, we put in place measures to strengthen non-bank financial institutions’ supervisory framework.  This too was praised.  (Good). Civil Service reform is priority of my Government and this, the Fund supports.  (Good again) The banking sector remains resilient. (Unquestionably good),” the Prime Minister, who is also Minister of Finance emphasised.

The IMF report stated that after a four-year contraction of economic activity there were firm signs of a recovery in 2013. Real Gross Domestic Product (GDP) is estimated to have grown by 1.7 percent with a pickup in tourism and construction, notwithstanding declines in the manufacturing and communications sectors. Employment also picked up, with number of total employees up by 10.2 percent and wages up by 5.1 percent in the first half of 2013.

Inflation has remained low at 0.6 percent through end-October (y/y). Notwithstanding the challenges associated with the prolonged recession and the debt restructuring, the financial system has remained stable. The recovery in tourism receipts and strong increase in Citizenship by Investment (CBI) application fees contributed to a narrowing of the current account deficit from over 20 percent prior to 2011 to about 11-12 percent in 2012 and 2013.

The improved current account, together with strong capital inflows has significantly strengthened the external position. International reserves have increased since the start of the SBA from 5-months-of-imports to over 8 months at end-November 2013 (or 6 months excluding IMF disbursements).

“The fiscal position has substantially improved, from a deficit of 7.8 percent of GDP in 2010 to a projected surplus of 8.6 percent in 2013. The stronger fiscal performance reflects policy efforts to contain expenditures, strengthen revenues, including the introduction of the Value Added Tax (VAT), interest cost savings from debt restructuring, as well as substantial CBI inflows. The improved fiscal situation allowed for the 13th month wage payment in September 2013 after a nominal wage freeze since 2010. Consequently, performance under the SBA remains broadly on track. The fiscal targets for end-June and end-September 2013 have been met, although there are delays in the implementation of structural reforms through end-2013.

“Growth in 2014 is expected to accelerate to 2.5-3 percent, with the continued recovery in tourism—supported by an increase in air lift capacity—and ongoing construction activity fueled by CBI related inflows and other Foreign Direct Investment (FDI) projects. Over the medium-term, the economy is expected to continue to recover and reach its potential growth rate of about 3-3.5 percent,” the IMF said.