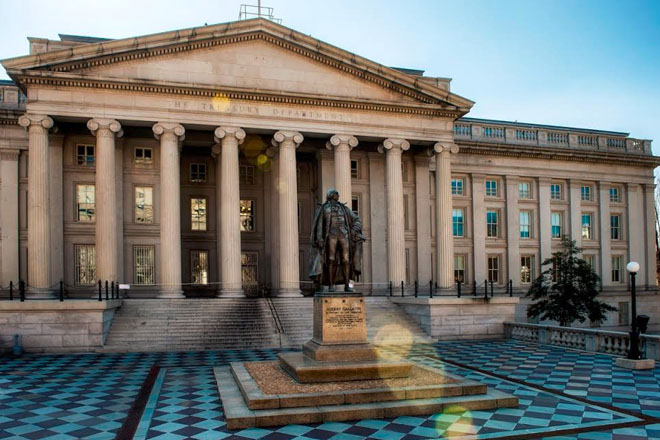 PM Harris holds discussions With U.S. Department of the Treasury

(SKNIS): Prime Minister of St. Kitts and Nevis, Dr. the Honourable Timothy Harris, who is in Washington D.C. to attend the United States-Caribbean-Central American (US-CCA) Energy Summit in Washington D.C. from May 3-4, 2016, is holding talks with officials from the United States Department of the Treasury on the burning and contemporary issue of correspondent banking prior to the opening ceremony of the US-CCA Energy Summit.

Prime Minister Harris holds the portfolio of Minister of Finance and is a member of the Eastern Caribbean Central Bank (ECCB) Monetary Council, which is the highest decision-making authority of the Bank.

The issue of correspondent banking and de-risking has become a major concern globally in light of the risk of money-laundering and terrorists financing. Banks in the Caribbean have come under the microscope for such risk and are therefore being threatened to strengthen their financial systems or face the consequences of being cut off from major international banks.

Governor of the ECCB, Timothy Antoine, said that we should be very concerned as a region about losing our relationship with other banks.

“What is driving the issue globally is the risk of money laundering and terrorists financing,” he said.

Mr. Antoine also said that on a recent trip to Washington, he discovered that there is “a genuine concern among some of the bankers that they could be personally liable and they could be sent to jail and because of that they are extremely cautious—especially with the smaller banks—they look at the risk, they look at the cost versus the benefit and they basically decide, it’s not worth it, cut.”

The Governor of the ECCB said that it is impossible for a bank to survive without relationships especially in an age of wire transfers and that if the region loses its correspondent banking relationships then it would adversely affect sustainable development because it would affect sectors such as tourism, trade, travel, education, and remittances.

He said that the ECCB has developed a four-pronged strategy to deal with the fallout from correspondent banking. The first is advocacy using political and diplomatic channels to raise awareness and asking for a reasoned response. He said that the Region is not asking for a lowering of standards with respect to Anti-Money Laundering (AML) and Combatting Financing of Terrorism (CFT) regulations. The second is that national/indigenous banks have been required by the ECCB to sign on to the swift registry which enables KYCC (Know Your Customer’s Customer). He said that about half of the banks have done so. The third is amalgamation of national banks where banks can get together and muscle up to meet threat and address threats such as de-risking and also to be able to compete. The fourth is the establishment of a non-deposit bank in the United States. He said that at the very least a Caribbean owned bank will be a bit more sensitive and better understanding of the Caribbean risks. He however admitted that he didn’t see this happening at the level of governments but rather the private sector.

The multi-lateral agency, the International Monetary Fund (IMF), reported that up until June of 2015, about 10 banks in the region in five countries had lost all or some of their currency with respect to correspondent banking relationships.

On May 20, 2014, the United States Department of the Treasury issued a FinCEN advisory to alert financial institutions that certain foreign individuals were abusing the Citizenship-by-Investment (CBI) Programme sponsored by the Federation of St. Kitts and Nevis to obtain passports for the purpose of engaging in illicit financial activity and that financial institutions can mitigate exposure to such risk through customer due diligence, including risk-based identity verification consistent with existing customer identification programme requirements.

The Advisory at the time stated clearly that the US Department of the Treasury was not pleased with the poor management of the CBI Programme under the ousted Douglas-led Administration. Under Douglas’ watch, the St. Kitts and Nevis’ CBI Programme was branded as “attractive to illicit actors because the programme, as administered, maintains lax controls as to who may be granted citizenship.” The advisory further stated that “While the St. Kitts-Nevis government has publicly pledged to improve these controls, FinCEN believes that they remain ineffective.”

Since sweeping to power in the February 2015 General Elections, the Government of National Unity has been on a campaign to reform the CBI Programme and has put several mechanisms in place such as adding new professional staff, with training and professional competencies; the introduction of a new citizen case management system for faster processing of applications which allows for 24-hour access for the input of applications, as well as tracking of applications as they work through the system; and the commissioning of a technical committee which institutes a more formal and documented process over the denial of applications.

“We recognized that mistakes had been made by the former regime. The programme had been abused to a point that was willful, almost dishonest. The people voted for a change,” Prime Minister Harris said.

Well known Washington power broker Lanny Davis has agreed to help St Kitts and Nevis in its efforts to remove the FINCEN Advisory on St Kitts and Nevis. Lanny Davis is a lawyer and communicator with decades of experience. He has served in numerous roles, most significantly as former White House special counsel to President Clinton.