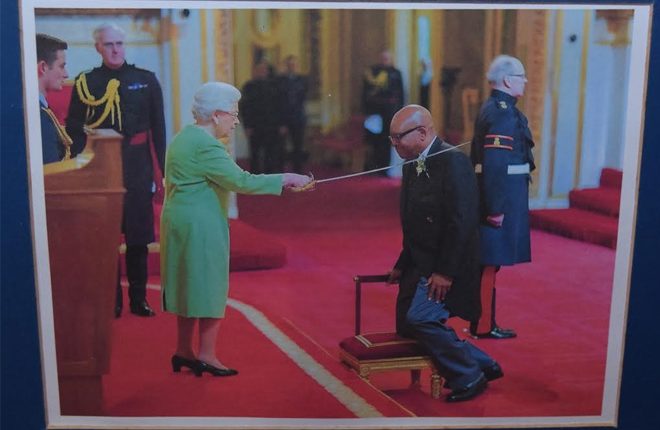 (SKNIS): The efforts of His Excellency Sir S.W. Tapley Seaton to transform Government House and the Office of the Governor General to be more people-oriented were praised on Monday, May 08, at the launch of “Inside Government House” Exhibition at the St. Christopher National Trust (SCNT).

Prime Minister, Dr. the Honourable Timothy Harris, described Sir Tapley, as one of the “most beloved sons of the soil”, adding that his knowledge of history is extensive.

“This is a son who has been able to, as it were, reconcile different aspects of our history. This is a man who is well steeped in our history, not just our contemporary history, but for me, he is somewhat of a history professor. And that ability that he has to locate things and people in the context of our long march for development, I want others to emulate,” said Prime Minister Harris.

Dr. Harris reflected on Sir Tapley’s father who had served at the Federal level but could not on his own “volition” enter on the compounds of Government House.

“Today, that father must be smiling in his grave. Look how far we have come that his son Sir Tapley is now the man in charge of Government House. That is part of the history which we must try to create through our actions and as we visit some of the things that we will see, we see how through his own family life and upbringing, the insisting upon certain values, Sir Tapley, the son then of a man who would be delayed outside for entrance could now and be the most important figure in an independent St. Kitts and Nevis,” he said. “And he has used that blessing of the Office, not to ostracize, but to include and I want to hail him for the many functions and events which are now being held at Government House, popularizing it and ensuring that our people know that this is part [of our history].”

Prime Minister Harris said that often times one looks in disdain of the federation’s history, as opposed to extracting lessons from it which can in turn help persons to move forward. He added that Sir Tapley is an example of someone who will leave no stones unturned as it relates to the history of St. Kitts and Nevis, as his actions will redound to the benefit of all.

“Whenever had been the challenges of history, he has moved forward to a future. And by sharing with us his own experiences, his family’s experiences, he is saying, working together with a compassionate mind and heart, thinking not just of ourselves but our country, we can make a difference,” he said. “So to Sir Tapley for already making a huge difference to our perspective and our view of history and for serving so excellently as Head of State, I want to say on behalf of my Cabinet and the beloved people of St. Kitts and Nevis, thank you and continue to do well.”

Dr. Harris said that it is important for Kittitians and Nevisians to understand the country’s past, and understand it through the lived experience of the people. He encouraged persons to emulate Sir Tapley, as much can be learned from his own experiences, but most importantly, from his work and contribution to the federation’s history.