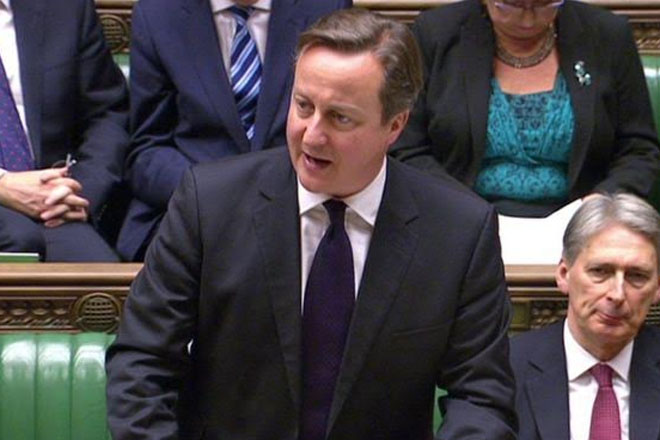 PM: I will make case for strikes against IS in Syria

(BBC) David Cameron has promised a “comprehensive strategy” to win MPs’ backing for bombing Islamic State militants in Syria as well as Iraq.

The prime minister told the Commons the Paris attacks had strengthened the case for air strikes, suggesting there could be a fresh vote on the issue.

He wanted to “do the right thing for our country”, and hit the “head of the snake” of IS in Raqqa, Syria, he said.

MPs rejected strikes against Syrian government forces in a 2013 vote.

Labour leader Jeremy Corbyn said any military response should have the support of the international community and legality from the United Nations.

Two years ago, MPs voted against possible UK military action against Syrian President Bashar al-Assad’s government to deter the use of chemical weapons.

Parliament later approved British participation in air strikes against Islamic State extremists in Iraq, which have been ongoing ever since.

Mr Cameron promised action against IS would not be extended to Syria without Parliament’s consent – and said he would only hold another vote when he was sure of a “consensus” among MPs.

Downing Street has stressed it is not setting out a timetable publicly for a Commons vote yet, says BBC political correspondent Chris Mason.

An “important first step” would be setting out his case in a personal response to a recent Foreign Affairs Committee report, the prime minister said – with sources indicating this would be done before the end of the month.

Addressing the Commons on Tuesday, Mr Cameron said that British planes had attacked 350 targets in Iraq and offered support to their allies’ action over Syria.

But he said Islamic State – also known as Isis, Isil or Daesh – did not recognise or respect the border between the two countries.

“It is in Syria, in Raqqa, that Isil has its headquarters and it is from Raqqa that some of the main threats against this country are planned and orchestrated,” he said.