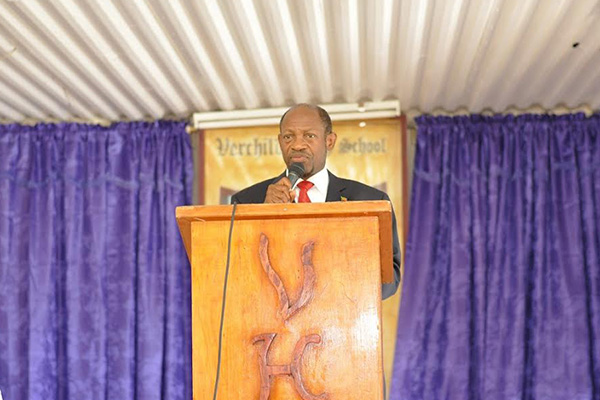 Basseterre, St. Kitts (SKNIS) — Prime Minister of St. Kitts and Nevis the Right Honourable Dr. Denzil Douglas said Friday’s (March 21) launch of the Education Network (EduNET) – which provides Wi-Fi access on high school campuses – is in keeping with the philosophy of empowerment that he shares with past national leaders.

Prime Minister Douglas told the students at the Verchilds High School and others viewing, that almost 50 years ago as many as 95 percent of local children “many of them bright, eager and filled with potential” were refused enrollment to the “island’s secondary schools.”

Under the leadership of Premier Robert Llewellyn Bradshaw, that “injustice” ended and it was “declared that every child who walked this land would, from that time forward, have the opportunity to discover and develop their minds.”

“That was step one. And there have been many additional steps since then,” declared Prime Minister Douglas. Other mentioned steps included the distribution of personal computers to all high school students. An extension of that initiative will see the provision of dongles that will allow students without internet at home to access 4G connections. The Prime Minister also announced that government was exploring options in order to provide primary school students with personal devices that will allow them to access the internet and empower their minds and learning.

Much like the EduNET, specific blocks will be put in place for their protection.

“And so as I think about Sir Robert Llewellyn Bradshaw taking that bold step in prying open the doors of every high school to every student in this country,” said the Prime Minister. “Today we take that bold step as well in ensuring that you are connected and that the digital divide is being replaced so that our young, bright people of our secondary schools can connect not only with other school students around this nation but can connect with the rest of the world.”

The Clarence Fitzroy Bryant College (CFBC) will also be served by the EduNET, as the island’s premier tertiary level institution transforms to incorporate more classes in collaboration with the University of the West Indies (UWI).

The EduNET was simultaneously launched at the Basseterre, Verchilds, and Cayon High Schools as well as the Saddlers and Charlestown Secondary Schools. However, every high school campus was previously equipped with the necessary equipment and has been used regularly by a test group of teachers and students.