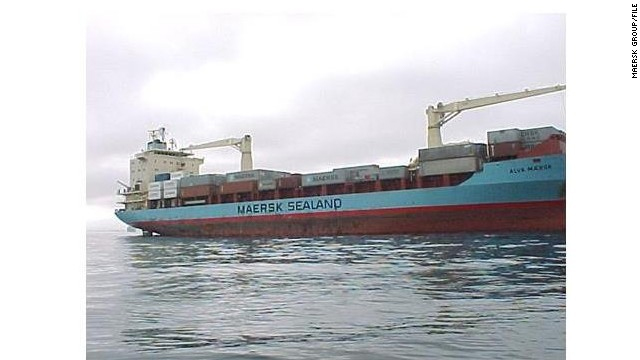 Seychelles police identified them on Thursday as Jeffrey Reynolds and Mark Kennedy.

The vessel was moored at Port Victoria in the Indian Ocean archipelago. The men, both 44, were found dead on Tuesday. CNN first learned about the incident on Twitter.

“A postmortem will be carried out this week in order to establish the cause of their sudden deaths,” police said, adding that the police investigation is ongoing.

The Maersk Alabama was targeted by Somali pirates in an attempted hijacking off the east coast of Africa in 2009. The 2013 film “Captain Phillips” is based on the incident.

“It’s bizarre. Of course, it’s a shock. They’re all great guys,” Rothrauff said. “I’m absolutely clueless as to what happened.”

Kevin N. Speers, a senior director for Maersk Line Limited, said in a statement that the security contractors boarded the vessel on January 29, and that their deaths were were “not related to vessel operations or their duties as security personnel.”

“Contracted security is part of anti-piracy protection plans to safeguard crews and vessels,” Speers said. “In Maersk Alabama’s case, she is persistently in high-risk areas since she provides feeder service to the east coast of Africa. The vessel was cleared to complete cargo operations, and she is now at anchor awaiting further instructions.”

Senior Chief Petty Officer Daniel Tremper said the U.S. Coast Guard had been notified about the deaths of two U.S. citizens and is investigating, but “due to the nature of the investigation, that will be about all that we can provide right now.”

State Department spokeswoman Marie Harf confirmed the men were U.S. citizens. The Coast Guard is involved in the investigation because the Maersk Alabama is a U.S.-flagged ship, Harf said.

Police said the ship arrived in the Seychelles on Sunday with a 24-man crew and had been expected to leave Tuesday.

The bodies were found by a colleague who had gone to check in on one of the men in a cabin at about 4:30 p.m. Tuesday, Seychelles police said.

In April 2009, four armed pirates attempted to hijack the Maersk Alabama 380 miles off the coast of Somalia. After the crew sank the pirates’ vessel and foiled their efforts to take control of the container ship, the pirates took the ship’s captain, Richard Phillips, hostage on a lifeboat. The incident ended three days later when Navy sharpshooters killed three of the pirates and captured the fourth. Phillips was unharmed.