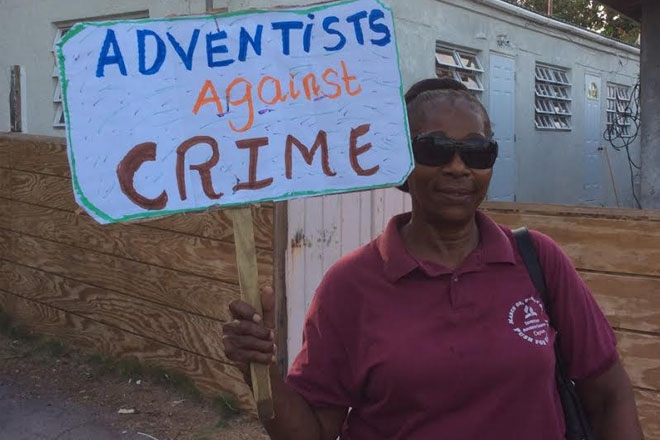 Basseterre, St. Kitts (SKNIS) — Acting Commissioner of Police Stafford Liburd has saluted the pastor and congregation of the Cayon Seventh Day Adventist Church in Cayon for hosting a successful street march against crime and gun violence on the weekend.

Over 200 individuals including men, women and children answered the call for the community to become even more engaged in fighting crime. The youth were out in their numbers with the drum corps and the Pathfinders, which is a youth organization from the Cayon Seventh Day Adventist Church, leading the way. Marchers held signs that read Adventist against Crime, Jesus Saves and other positive messages. Onlookers noted that there was a peaceful feeling of solidarity amongst marchers. Many stated they could feel the Holy Spirit while others shouted we should do this island wide with other churches promoting unity amongst the population.

Acting Commissioner Liburd, who grew up in the Cayon community, said it was an excellent initiative that demonstrated the convictions of the congregation. He spoke at a rally after the march and told the gathering at Maynard’s Park that during his days as a youth, there was no separation between upper and lower Cayon and people moved about freely without hindrance, without fear of gangs or any semblance of danger.

“We believe the people of Cayon ought to work together to reduce this fear,” he stated, while assuring that the police will continue to increase security measures to enhance public safety. “I commend the Seventh Day Adventist Church for the effort and appeal to other persons to join in and ensure that the village of Cayon and in fact the Green Valley area (Keys to Ottleys) is safe.”

The acting commissioner said he was pleased to participate in the event and added that he and other members of the force welcome the opportunity to interact with residents in various ways.