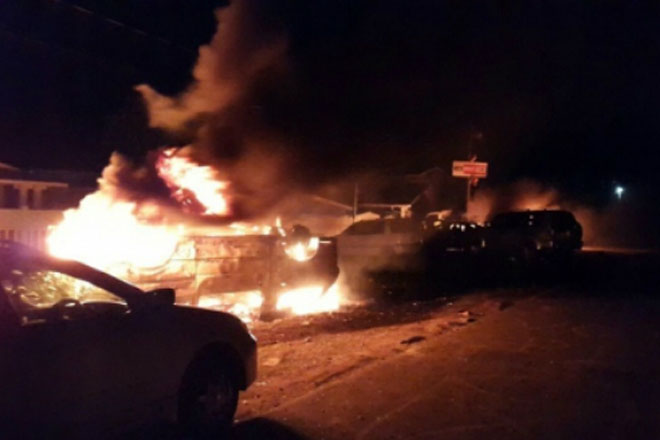 Political parties appeal for calm after night of unrest in Guyana

Both the ruling People’s Progressive Party /Civic (PPP/C) and the opposition coalition – A Partnership for National Unity (APNU) and the Alliance for Change AFC – issued calls to their supporters to refrain from any act of violence.

Their calls follow a statement by the chairman of the Guyana Elections Commission (GECOM), Dr Steve Surujbally that the Guyana Police Force (GPF) had been experiencing difficulties transporting statements of polls (SOP) and ballot boxes from some of the 2,999 polling stations.

“There’s an environment that is not conducive to the safe movement of the ballot boxes at this point in time.

“We are ourselves engaging in matters that should ease the situation but at this point in time the ballot boxes and the statements of polls are not moving the way we thought that they would move,” he added.

Surujbally had also appealed to the political leaders to help ease the tension in the country by urging their supporters to ensure “peace and tranquillity” in the country.

“This peace and tranquillity cannot prevail within an environment of turbulence. I would like to ask the persons who are milling around polling stations to disperse and go home,” he said.

On Monday night, a number of cars and a stable belonging to a resident of Sohpia were set ablaze after rumours spread that the man had ballot boxes at his house.

Though those claims were never verified Sophia residents rushed out to the road way and launched a protest resulting in members of the GPF and the Guyana Fire Service being rushed to the community.

In a statement, the APNU+AFC Presidential candidate, David Granger, called on residents to remain calm and cautioned them against taking part in any disorderly event. He said any acts of disorder or violence cannot be for the benefit of the coalition.

In its statement, the PPP/C also called for calm but said the APNU+AFC must take responsibility for the situation that got out of control in the Sophia community.

Former president Bharrat Jagdeo at a news conference during the early hours of Tuesday, said he had warned about persons milling around polling stations to “guard ballot boxes”.

He said the APNU+AFC and its leaders will have to take responsibility for the properties and vehicles which have been damaged.

Jagdeo also called on the police to ensure law and order is maintained.