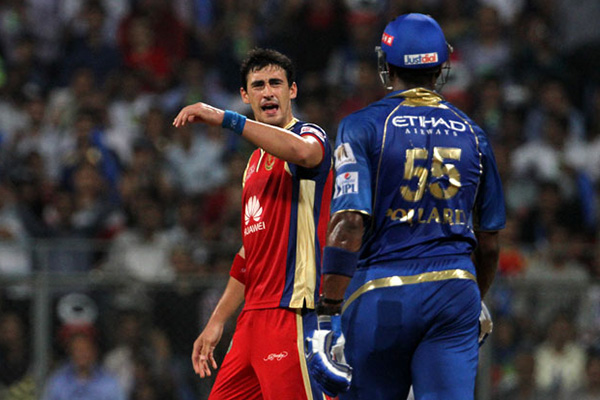 Pollard and Starc stared in heated late innings scenes before Mumbai Indians defended a total of 187 by restricting Bangalore to 168 for eight in 20 overs at the Wankhede Stadium.

Mumbai Indians achieved their total by riding on Rohit Sharma’s 35-ball 59 and Pollard’s handy 43 off 31 balls while Bangalore, despite a knock of 38 from Chris Gayle, lost their way from 94 for one in the 10th.

Sharma and Pollard came together at 84 for 4 in the tenth over and accelerated late to add 97 in the next ten for Mumbai.

Bangalore’s big hitter Gayle and Parthiv Patel responded with an opening stand of 53 in five overs.

But the tension unfolded in the 17th over when Starc fired a bouncer at Pollard who just avoided getting hit when he missed an attempted hook.

The fast bowler had a few words to say to Pollard who responded by waving him away.

The confrontation continued into the next delivery when Pollard pulled away just as Starc was about to deliver, angering the Australian who angled the ball past the Trinidadian cricketer.

An incensed Pollard reacted by threatening to throw his bat at Starc but ended up throwing it close to himself.

Starc had the satisfaction of running Pollard out, but before that, he teased the hopelessly stranded batsman to come back before contemptuously swatting the bail off.

The saga continued in the second half when Starc was greeted by a bouncer from Pollard, who eventually caught him at cover in the next over.

Pollard’s tense scenes with Starc followed a minor run-in with Gayle, when he stood outside his crease and dared his West Indian counterpart to run him out.

Despite their loss, Bangalore has enough games to qualify for the knockouts while Mumbai, who rebounded from a five game losing streak, will want to continue winning.