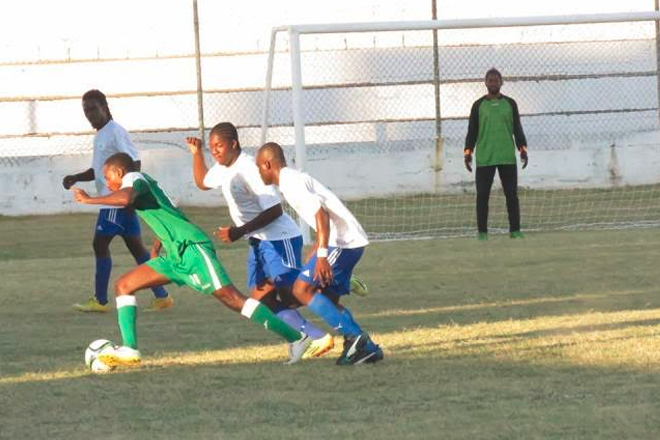 (ZIZ News) – The second round of the SKNFA Premier League competition kicked off on Saturday with three matches.

In a battle of the two bottom ranked teams, Rivers of Living Water defeated Bath United for its first win of the 2015/16 season.

Joshua Liburd scored a hat trick in the 3rd, 52nd and 73rd minutes to lead Rivers of Living Water to victory.

In the second game of the day, the second seeded Sol Island Conaree FC came up against Fast Cash SPD United. That match ended in a 1-1 draw.

Errol O’loughlin scored for Conaree off a penalty in the 82nd minute. Moments later, Sheldon Richards added the equaliser for SPD United.

Joash Leader and Keithroy Freeman were the stars for St. Paul’s, scoring two goals each.

Leader’s goals game in the first half: in the 2nd and 29th minutes, while Freeman scored his in the 34th and 65th minutes of play.

The competition continues on Tuesday with the final two matches of the week.

In the first game at 6pm, Winners Circle Newtown United will look to continue its dominance when it takes on ELCO Limited St. Peter’s.

Then at 8pm, the surging Flow 4G Cayon Rockets will come up against Hobson Enterprises Garden Hotspurs. Both matches will be played at the Warner Park Football Stadium.