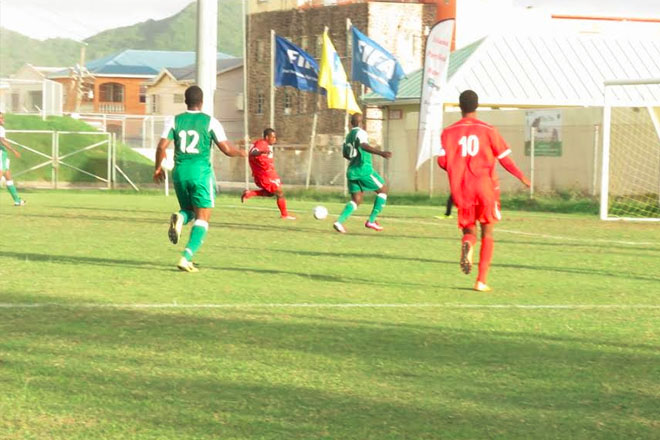 Matches commenced on Saturday at Warner Park, when Fast Cash SPD United went up against and defeated Rivers of Living Water.

Three players scored two goals each for SPD United in their 6-1 victory over the bottom ranked Rivers of Living Water team.

Kirea Jarvis scored in the 7th and 27th minutes. Xavier Henry struck his 0069n the 31st and 36th minutes while Darrel Challenger added his two goals in the 32nd and 76th minute of the game. The lone goal for Rivers was scored by Shaquille Isles in the 15th minute, off a penalty.

Jakiel Leader scored the game’s first goal in the 25th minute. However, Errol O’loughlin added the equaliser for Conaree in the 70th minute to deny St. Paul’s a much needed win.

Then on Sunday, Rams Village Superstars prolonged the misery for Bath United by handing the Nevis based team a fifth straight loss of the season.

Dillon Caines scored the first goal for Village in the 12th minute, before Kimaree Rogers scored two unanswered goals in the 36th and 83rd minutes to guide Village to a 3-0 win.

In the final game of the weekend, league leaders Winners Circle Newtown United needed a little help from the opposition to maintain its perfect run.

Newtown was able to walk away with the win after Salas Cannonier of Elco Limited St. Peter’s scored an own goal just before halftime.

It was the only goal of what turned out to be a defensive game.