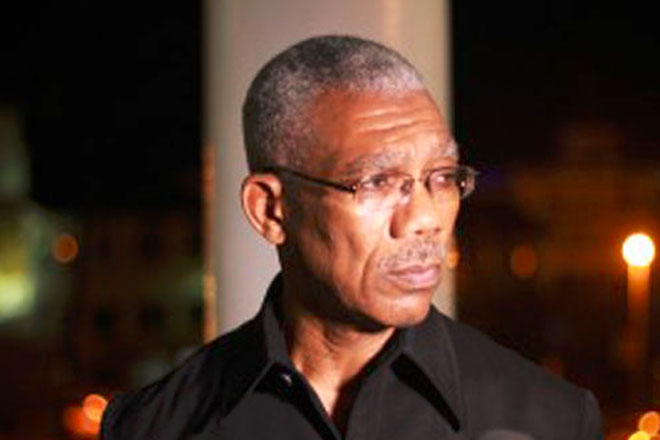 Georgetown, Guyana (CMC) — Guyana Thursday dismissed claims by Venezuela that it was seeking to provoke and isolate the Spanish-speaking country as both nations stepped up their war of words in their ongoing border dispute.

President David Granger in an address to the National Assembly said that Venezuela’s claims to over 150,000 km² of Guyana’s land-space and a large part of its hydrospace have their origins in its rejection of the 1899 award of the international tribunal as a nullity.

He said the land boundary, subsequent to the award, was surveyed and the details embodied on maps and certified by agreement of January 10, 1905.

“Guyana will continue to pursue a wide range of diplomatic options as its first line of defence. Guyana remains resolute in defending itself against all forms of aggression. We remain wedded to the ideal of peace. We have never, as an independent state, provoked or used aggression against any other nation. We have never used our political clout to veto development projects in another country.

“We have never discouraged investors willing to invest in another country. We have never stymied development of another nation state. We do not expect, not will we condone, any country attempting to do the same to us,” he told legislators.

Granger, who came to power following the May 11 elections, said that hi country wanted friendly relations with its Continental neighbours and the Caribbean Community (CARICOM) to develop its resources for the benefit of its people.

“We want the Caribbean to be a zone of peace. Guyana has no interest or intention to be aggressive towards Venezuela, a country of 912,050 km2, more than four times the size of Guyana; a country with a population of more than forty times that of Guyana; a country with armed forces — the National Bolivarian Armed Forces — FANB – with more than twenty times as many members as Guyana’s Defence Force. “How can Guyana launch an aggression against Venezuela?,” Granger asked, saying his administration expects Venezuela “to observe, fully, the 1897 Treaty, the 1899 Arbitral Award, the 1905 demarcation of the boundary between Guyana and Venezuela pursuant to the Arbitral Award, the 1966 Agreement and other formally ratified documents between the two states.

“Our objective in the short term is to have all threats withdrawn. We shall be seeking a permanent juridicial solution under the auspices of the Geneva Agreement and under international law, in the long term,” he said, urging support from the National Assembly “as we defend our right to exist, our right to development, our sovereignty and our territorial integrity”.

In his address, Granger a retired Brigadier in the Guyana Defence Force, said that on July,6, President Maduro had indicated that he was withdrawing the decree which he issued on May 26, “which have impinged on the exercise of Guyana’s sovereignty and our rights to our exclusive economic zone,” but replaced it with another.

The new decree supports and justifies the actions of the Bolivarian National Armed Force in defending the newly created Integrated Defense Maritime Zones.

The May 26 decree had included all the Atlantic waters off the Essequibo Coast and the purported annexation of the waters off Essequibo now takes in the oil-rich Stabroek Block, where American oil giant Exxon Mobil in May found a “significant” reserve of high quality crude oil.

ExxonMobil said the discovery was made in one of the two wells it dug, in the Liza-1 drill site, which realised more than 295 feet of high-quality oil-bearing sandstone. Venezuela has demanded that Guyana halt the oil exploration.

But in his address, Granger said the Venezuelan government had no right, either under the Geneva Agreement or in international law to oppose exploratory activities by Exxon Mobil and its subsidiary Esso Exploration and Production (Guyana) Limited in the ‘Stabroek Block.’

“Venezuela had no right to demand ‘prior notification’ owing to the fact that the specific area of operations in the Stabroek Block is located in a new maritime area over which sovereignty has been claimed by Venezuela.”

Granger said that the action taken by the Venezuelan Foreign Minister Delcy Rodriguez in February to write to the country manager of Esso Exploration and Production (Guyana) Limited “therefore, constituted an unnecessary and unlawful interference in Guyana’s sovereign jurisdiction.

“Guyana’s sustained efforts to alert the international community of the adverse effects and to seek the repudiation of the Venezuelan unilateral and illegal delineation of maritime territory, not only in relation to the territory of Guyana, but other states in this hemisphere, have come to fruition.

“Guyana has never used aggression against any State. Guyana has always embraced the principle of the peaceful settlement of disputes. But in as much as we are a peace-loving nation, we will not allow our territorial integrity to be threatened or violated. We consider Decree 1.787 as constituting an act of aggression against Guyana.”

Granger said he had also sought the solidarity of the regional and international community and that the Commonwealth has already expressed its support for Guyana.

“We have sought solidarity from the Caribbean Community,” he said, noting that the just concluded CARICOM summit in Barbados had ended with a communiqué with regional leaders expressing “ their deep concern over the decree because of its implications not just for Guyana but also for a number of other Caribbean states”.

Granger said he also had talks with UN Secretary General Ban Ki-moon and was pleased with the deliberations.

He said Guyana therefore rejects the description of its maritime territory as a ‘defence zone’ of the Bolivarian Republic of Venezuela.

“Guyana is a sovereign State. It is empowered under international law to exercise sovereign rights over its continental shelf and exclusive economic zone. Guyana has full and unfettered authority to unilaterally explore and exploit the living and non-living resources within its jurisdiction. Any objection to, or obstruction of, the exercise of such jurisdiction is contrary to international law.

“The expulsion of an unarmed, seismic survey vessel from Guyana’s exclusive economic zone by a Venezuelan naval corvette, therefore, was a dangerous and egregious exhibition of gunboat diplomacy” Granger said.