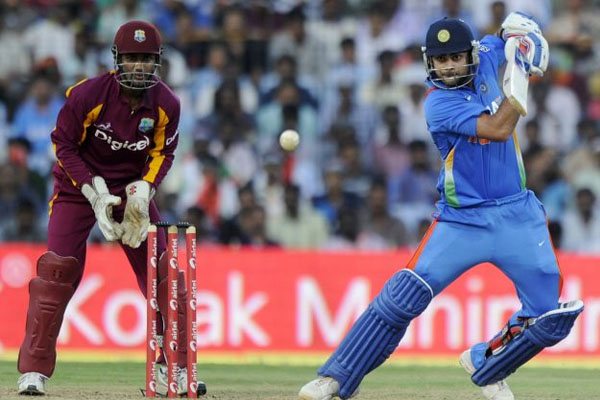 Preview: India vs Windies – In numbers

Dubai, United Arab Emirates — India is at No. 1 in the Reliance ICC Team Rankings for One-Day Internationals at the moment with 113 ratings points, while West Indies is down at No. 8 with 96 points.

The visitors will, therefore, be desperate to put that situation right when the two teams face off in a five match ODI series in India, starting with the first game in Kochi on Wednesday (October 8).

That aside, of course, both teams will be giving the contests extra attention as it is with these matches that the preparations for the upcoming ICC Cricket World Cup 2015 will kick off.

There are just over fifty One Day Internationals left across the world before the start of the ICC Cricket World Cup on February 14, so every match is crucial as the build-up gathers pace.

12 – India have the upper hand of late though, and they’ve won 12 of the 17 ODIs between the two teams since the beginning of 2011, losing the other five.

18 – Virat Kohli has made more ODI Centuries than anyone else in the world since the start of 2010 with 18 three figure efforts.

4 – Ravindra Jadeja is in fourth place in the ICC Reliance ODI Rankings for Bowlers, having picked up 14 wickets at 20.92 in his last seven matches.

4.32 – Bhuvneshwar Kumar was one of India’s brightest sparks in the recent ODI series in England, with an economy rate of 4.32, and entered the top 15 in the rankings after that.

196 – Dwayne Bravo also needs just four more wickets to become the third West Indian to complete 200 career ODI wickets after Courtney Walsh and Curtly Ambrose, he has 21 wickets from his last 11 games at an average of just 19.

247 – The number of ODI appearances for India Captain, MS Dhoni. If he plays the first three games of the series, he will complete 250 career ODIs.

12 – Suresh Raina is just four games away from becoming the 12th Indian to play 200 ODIs.

98 – Jerome Taylor and Kemar Roach both have 98 ODI wickets and need two scalps to become the 15th and/or 16th men to take 100 ODI wickets for West Indies.