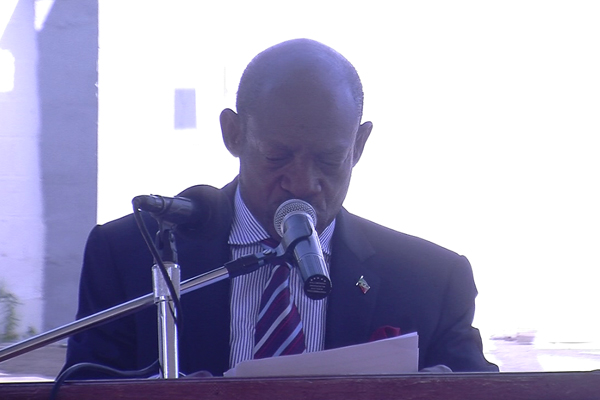 (ZIZ News) — “The progress in our country continues and the positive changes go on” were the opening words of Prime Minister, The Rt. Hon. Dr. Denzil Douglas when he spoke at the handing over ceremony of a Police Mobile Command Unit.

Dr. Douglas said the elements of consistency, continuity and stability are needed to ensure continued development and growth.

He then spoke of the advantages the new Mobile Commend Unit will generate for the country.

The nation’s leader added that the Mobile Command Unit reflects a number of important realities.

“It reflects the seriousness with which this government and the Royal St. Kitts-Nevis Police Force take our responsibility to protect and to serve. Secondly, it reflects the importance of long range planning in the operations of this government because really, as early as 2006, in our talks with the European Union, we had made it very clear of our interest in ensuring that the safety of the people of this country be the main focus of support under the 10th European Development Fund, the 10th EDF,” he said.

Prime Minister Douglas then said much thought and work had gone into securing the unit.

“This unit reflects the innovative and visionary approach of this government to the important issue of service because the decision to obtain this Mobile Unit was not taken one week ago or in fact two months ago. In fact, i should say that this was taken since September 2012,” he said.

The contract for the manufacture of the unit was signed in 2013 and by October 2014, that unit was on St. Kitts.

One month later, members of the police force underwent training to operate the Mobile Unit.