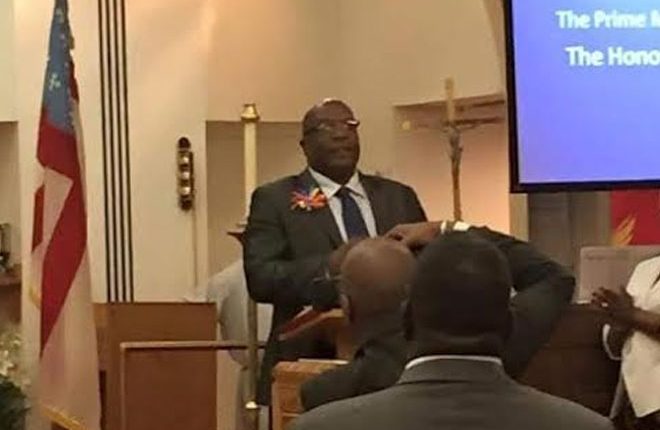 Bronx, New York — St. Luke’s Episcopal Church was home to an exciting and extremely well attended Thanksgiving Service in celebration of the new St. Kitts-Nevis Team Unity Government, which was elected to office on February 16th, 2015.

Team Unity North America organizers crafted an exceptional celebratory service which they dubbed “Togetherness”, a theme which was embraced by the hundreds of Nationals who packed the Bronx, NY church.

The Reverend P. Alistair Rawlins brought the spoken word and while he used the opportunity to commend the new Team Unity Government, he also reminded those in attendance that “Democracy is fostered when both the Elected and the Electorate do their part in Nation Building. We must work to enhance our democracy by becoming agents of justice working arduously to improve upon what we have inherited.” While he lauded the will of the people who clearly sought change in the last general elections, Reverend Rawlins suggested that St. Kitts and Nevis is too small a Nation for Political Tribalism. “If this practice existed before, NOW is the time to cut off its head,” Rawlins stated. The distinguished Reverend embraced “Togetherness” and the concept of a unified St. Kitts and Nevis and ended his message by invoking God’s blessings on the future of the blossoming twin island nation.

Premier of Nevis the Honourable Vance W. Amory brought warm greetings from the people of Nevis and the Nevis Island Administration. Premier Amory expressed sincere appreciation for the opportunity to serve not just the people of Nevis but also the federation. He unreservedly declared his conviction that God has been the real architect of Team Unity’s victory and Thanked all who supported the new dispensation that resulted in change in the federation. Premier Amory vowed to do his part in earnest to improve the relationship between St. Kitts and Nevis and to make the island of Nevis a better place for all its inhabitants.

Brief remarks were also given by first time parliamentarian the Honourable Ian Patches Liburd. He greeted the audience with his familiar “familaaaay” salutation. Liburd declared that his experiences in the last few years were filled with hurt, heartbreak and horror but his confidence in God during his political journey helped to sustain him and lead to his 4 vote victory. He too vowed his commitment to Nation Building.

Ms. Abena Amory paid tribute to the new Team Unity government with a beautiful rendition of Beth Midler’s “Wind Beneath My Wings” and Ms. Sherisma Liburd rendered a soulful version of John Lennon’s “Imagine.” Samuel “Santoy” Barrette delivered a selection on the fife and Ural Swanston provided musical accompaniment on the organ, forming part of the historic celebration on Sunday.

Khenya Bridgewater and Nia Caprioli, granddaughters of the nation’s visionary and esteemed educator George Washington Archibald, recited a poem entitled “A Time for Unity,” which was written by Heather Archibald.

Dr. the Honorable Timothy Harris delivered brief remarks with conviction and clearly did not disappoint his eager and attentive audience. He expressed sincere gratitude to his fellow citizens for attending the Thanksgiving service and further thanked citizens for giving Team Unity a chance. He declared, “When we started this journey in 2013, many people doubted whether we could have lasted for any length of time. Despite the doubting Thomas’s, Unity supporters and ordinary people made change a reality. He further stated that the likes of Mr. Politics and Mr. Culture who called in to various radio stations day after day speaking to the challenges, the fears, the hopes and dreams of the ordinary man and woman are the real trailblazers of change in the federation of St. Kitts and Nevis. He reminded his audience that it is the work of remarkable citizens such as George Washington Archibald who made the concept of “Unity” a reality. The Elder Washy, who was also in attendance, stood proudly in acknowledgment of Prime Minister Harris’s recognition of him.

Dr. Harris reminded citizens that 70% of the people of the federation of St. Kitts and Nevis declared they wanted Unity! The leadership of Team Unity formally accepted that this was the will of the people and worked diligently to ensure this was accomplished.

Harris declared, “I pledge and so promise to do my very best to use my God-given talents and energies in public service to hold to the promises we (Team Unity) made to make St. Kitts and Nevis the best small island state in the world.”

In closing, Dr. Harris expressed his sincere appreciation to all who made the Thanksgiving service a reality and admonished those in attendance to continue to pray for the nation of St. Kitts and Nevis.

Mrs. Bernadine Callendar-James brought the lively celebratory service to an end with a detailed Vote of Thanks.

The service ended close to 8 PM with music, fellowship and refreshments in the hall of the church.