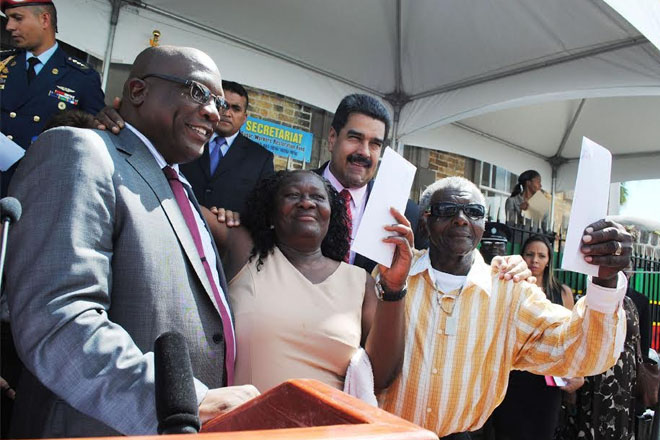 Basseterre, St. Kitts — Ms Patricia Vivian ‘Vera’ Hope has lived a full life, but never in her wildest dreams did she ever think that one day she would share a platform with two charismatic world leaders and even be hugged by them.

But with a name like ‘Hope’, and the rekindling on Wednesday September 23rd in Basseterre of the vision of the great Venezuelan leader Simón Bolívar for an Americas in which people are cooperating and in which governments and leaders look out for the poor and the disenfranchised, it did happen to Vera – as she is best known by her fellow villagers in Tabernacle.

His vision was spearheaded in modern times by the late Venezuelan President His Excellency Hugo Chavez, and carrying the torch is his successor, His Excellency Nicolás Maduro, who rekindled Bolívar’s vision on Wednesday September 23rd when he visited the Federation of St. Kitts and Nevis.

He was welcomed by the person he called his ‘brother’, Prime Minister of the Federation the Hon Dr Timothy Harris.

President Maduro, after a state welcome at the Robert L. Bradshaw International Airport, travelled to Basseterre’s central business district, and on South Independence Square outside CLICO Building presided in the symbolic handing over of cheques to former sugar workers. Representing the workers were Ms Vivian Hope and Mr Samuel ‘Chemical’ Wilson.

Prime Minister, the Hon Dr Timothy Harris was instrumental in seeking relief to aggrieved former sugar workers when the Bolivarian Republic of Venezuela gave a grant of EC$16 million to pay the former workers. He has told the public that this was possible because his government fully supports the vision of Simón Bolívar, and is not only part of the PetroCaribe arrangement, but also part of the ALBA arrangement.

Talking to the 63-year old Ms Vivian Hope at her home in Tabernacle, she said that she worked in the sugar industry from 1975 to 2005 when the industry was closed. She worked in the fields doing various tasks including cutting of cane, spreading trash and manure, weeding and digging grass.

“We did not have protective clothing,” said Ms Hope. “We wore our own clothes using our bare hands. I worked all the way to 2005 when the Sugar Industry as we know it was closed. When the sugar industry closed, I was paid $1,500 for all the years that I had worked.”

But with the coming of the Team Unity Government, Prime Minister the Hon Dr Timothy Harris ensured that those workers who were not properly compensated would be paid.

“The Prime Minister has done a very good job and I feel that I have been adequately compensated for the years that I toiled in the sugar cane fields, especially after the previous government said there was no more money for us,” said Ms Hope. “I am now at peace.

“Prime Minister Harris is good, good, good. He is so good I have no words to commend him for his humanely spirit of looking out for others. He is so good to us in Constituency Seven and the whole of the country. He went out to look for us. He said that and he meant it.”

Ms Hope who was in the company of her son, Mr Fernando Hope, during the interview said that with the money she received she plans to start a small business venture outside her house.

She is still mesmerised by the fact that the cheque was presented to her by the President of the Bolivarian Republic of Venezuela HE Nicolás Maduro, who also hugged her.

“Dr Harris has good international friends like HE Nicolás Maduro, the President of Venezuela,” said Ms Hope. “I want him to come back to St. Kitts. The friendship between these two leaders has greatly benefitted the country. Boy! Maduro is so cool; he is nice, he looks so sweet.”

Her son, 32-year old Mr Fernando Hope, recalled how he would see his mother going out to the cane fields, sometimes under very hot sun and sometimes when it would be raining and even as a young person he could tell that it was not an easy job.

“She was sacrificing for her six children and we are grateful for her,” said Fernando. “When she received the initial payment of $1,500 she said, and we knew, that it was not enough. She used it to buy house things and I would say that she shared it well with all her children.

“When the Prime Minister announced that there would be a further pay-out, I told her to go to the Sugar Workers Restoration Fund offices to fill out the forms. I am happy for her, and also for our Prime Minister Dr Timothy Harris and Venezuelan President Nicolás Maduro. I was at the airport to see Maduro arrive, and was outside CLICO House when my mother received her cheque.

“Our country can only be better with the new leadership that cares about others.”