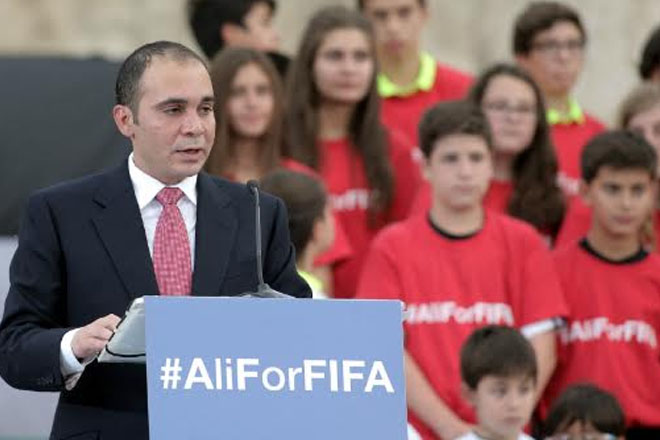 Amman, Jordan (AFP) — Jordan’s Prince Ali bin Al Hussein on Wednesday launched his bid to succeed FIFA president Sepp Blatter, saying he is the only candidate with the “guts” to confront corruption in football’s governing body.

“I stand here in this ancient place in the timeless heart of Amman to once again launch my candidacy for the presidency of FIFA,” he told a gathering within the ruins of the Jordanian capital’s Roman amphitheatre.

Prince Ali, 39, is a former FIFA vice president who led an unsuccessful challenge as a reform candidate against Blatter for the top job in May, just two days after the arrest of seven FIFA officials in Zurich.

He got 73 votes to 133 for Blatter in the first round of the election before withdrawing, only for Blatter to announce on June 2 that he would stand down in 2016.

“Let me be clear. I want to finish what we started,” he said in a speech on Wednesday before his supporters, among them Jordanian Prime Minister Abdullah Nsur.

“Ten months ago, I was the only person who dared to challenge Mr Blatter for the presidency of FIFA.

“I ran because I believe that FIFA needs change. And I had the courage to fight for change when others were afraid.”

Prince Ali, a half-brother of Jordan’s King Abdullah II, who was educated in the United Kingdom and the United States, said he conceded in a run-off against Blatter in May because “others were using me to make room for them”.

“They didn’t have the guts to run, but I did.

“Ever since President Blatter promised his resignation just a few days later, they have been scrambling to secure the job for themselves.”

“Since the last election, I have thought long and hard about how to reform FIFA. It will be a difficult task. We must overcome deep-seated corruption and political deal-making.”

FIFA has been embroiled in a major corruption scandal since the arrest of the seven officials on May 27th.

Its longstanding leader Blatter said he will give up when the special election for his successor is held on February 26th next year.

“My friends, I didn’t stand for election the first time to make way for others,” Prince Ali said on Wednesday.

“This election should be about football and not personal ambition. We have come too far to walk away now.”

Former France star Platini is seen as the favourite to win the election but the prince has heavily criticised the UEFA chief because of his links to Blatter — Platini helped Blatter become FIFA president for the first time back in 1998.

He has also said that Chung has been involved in FIFA for “too long”.

Like Platini, Prince Ali has called for Michael Garcia’s report into the controversial bidding process for the 2018 and 2022 World Cups, awarded to Russia and Qatar, to be made public.

But while in May he had the backing of Platini, and thus of Europe, that will not be the case this time.

And he is also handicapped by the fact that the Asian Football Confederation, with 46 votes out of a total of 209, has opted to back Platini as well.

Prince Ali said that, if he does win, he would encourage national associations not to be reliant “on a drip feeding system of support from Zurich”.

He also said he wanted to see every member association have a dedicated national stadium “within four years” and that he would “dramatically increase development programs to provide artificial pitches and practice fields across the globe and expedite them at a much faster rate.”

October 26 is the deadline for candidates to declare, and all must get five of FIFA’s national associations to sign their candidacy to get into the election.