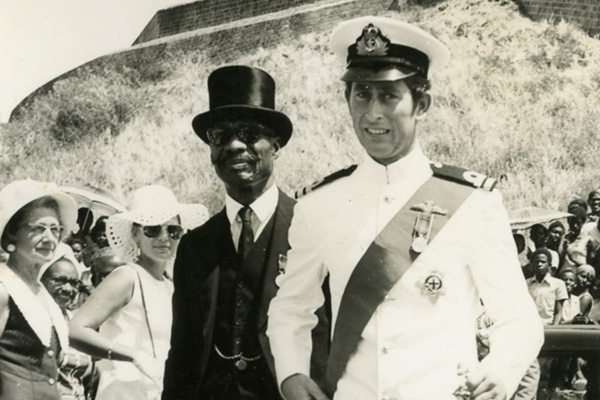 Prince Charles reminisces with PM Douglas on Royal Visit to St. Kitts in 1973

Basseterre, St. Kitts (CUOPM) – Heir to the British throne, His Royal Highness, Prince Charles, has been reminiscing about a visit to St. Kitts and Nevis in the 1973.

He was at the time seated next to St. Kitts and Nevis’ Prime Minister the Right Hon. Dr. Denzil L. Douglas during a State Dinner at the recent Commonwealth Heads of Government Meeting in Colombo, the Sri Lankan capital.

Britain’s Daily Telegraph reports that as they took their places for the meal, the Prince sat between the Pakistani Prime Minister Rajapaska and the Prime Minister Douglas.

The Prince of Wales used the speech at the dinner for Commonwealth heads of government to make a pitch for himself as the Queen’s eventual successor as head of the organisation.

Later during dinner and in exchanging words with Prime Minister Douglas, Prince Charles recalled his visit to St. Kitts in the early 1970’s to officially open the Prince of Wales Bastion at the Brimstone Hill Fortress National Park as guest of the Federation’s First National Hero and First Premier, the Right Excellent Sir Robert L. Bradshaw, and also of the service during that

The Commonwealth’s constitution does not specify that the headship of the 53-nation body should be hereditary, and some member states have suggested they might prefer an elected head to succeed the Queen.

The Prince, representing the Queen for the first time at a Commonwealth summit, clearly had the issue of succession in mind as he told delegates he had made 151 visits to Commonwealth countries, and had been “brought up in the family” of member states.

Reminiscing about meetings with heads of state down the years, the Prince said he had been to 41 of the countries whose heads were at the dinner, going to many of them several times over.

The Duchess sat between the Australian prime minister, Tony Abbott, and the Malaysian premier Dato’ Sri Mohd Najib bin Tun Abdul Razak. St. Lucia and Swaziland were also represented on her table, along with the first lady of Sri Lanka and the Commonwealth secretary-general, Kamalesh Sharma.

He said: “I just wanted to say that the result of all this is that after all the years I feel very much part of the family. It’s in my blood, I’m afraid. I have been brought up in the family and I think that what we are renewing here are those family ties, those family associations and family values. I feel proud and enormously privileged to be part of it all.”

After a day of official meetings for the Prince and a historic trip to northern Sri Lanka for David Cameron, the delegates had a chance to relax at the black tie banquet in the Cinnamon Lakeside hotel in Colombo.

The Prince greeted each president or prime minister as they arrived, together with the Duchess of Cornwall, wearing a turquoise chiffon beaded evening gown by Bruce Oldfield and a diamond tiara by the jewellers Boucheron.

Commonwealth dinners traditionally mix the heads of larger and smaller member nations, and on Cameron’s table were the delegates from South Africa, Papua New Guinea, The Bahamas, Sierra Leone and Pakistan.

The menu included a grilled vegetable terrine to start, a main course of pan fried modha, a local fish, in hollandaise sauce, and a mango and chocolate parfait for dessert. The wine list included Camel Valley Brut from Cornwall and wines from New Zealand and South Africa. The heads of government drank the toast from silver gilt goblets, each one uniquely engraved with the crest of the appropriate member government.