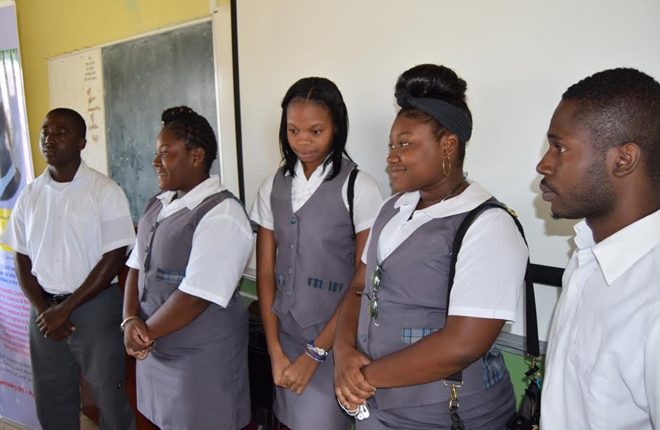 The project was introduced by Dr. Neals Chitan, International Social Skills Consultant and Crime Reduction Specialist, and is designed to engage strategies to help individuals, families and communities in the Federation to avoid a number of behavioral issues and criminal tendencies.

Students shared their views on the ‘Stop and Think” concept, noting that it is very important and that the possibilities exist for it to positively change the lives of many.

“It is worth a lot and once taken into consideration it will help you in the future, and I hope that everyone who sat in this [presentation] would take it and [use] it in their daily lives” said Kadeem Carty.

Trisannia Broughton said that she thinks it is a very good programme. She added that ‘Stop, Think, then Proceed’ can apply to daily lives, thus making one a better person and allowing them to make the right decisions in life that would redound to them making their dreams into reality.

Andrew Mosquito shared similar sentiments and said that everyone should follow the ‘Stop and Think” process.

“I think the ‘Stop and Think’ concept is a very good thing to do because you don’t know what you are doing at the time, so if you really stop and think for a moment and put things into perspective then you will actually come out on top,” he said.

The students are of the view that such a simple concept can eventually be something that can be used to minimize crime in the Federation. Kadeem used prisoners as an example and noted that had they thought about the consequences of their actions before proceeding they probably would have been free today and enjoying life. He also applied the concept to teenage pregnancy and said going forward teenagers need to ‘Stop and Think’ before they proceed.

Trisannia said the concept is a great approach to crime fighting. She stated that the crime rate in St. Kitts and Nevis is very high and so more positive persons and groups are needed in order to show and teach the youth the things that need to be done so as to guide them along the right path.

Project ‘Stop and Think’ will run for three months, with a total of eight sessions being held. Students are required to attend as much sessions as possible to be eligible for a Canadian Social Skills Certificate, which will be given to them on graduation day.