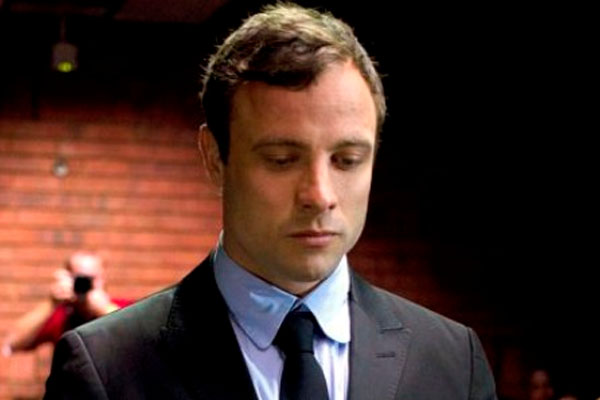 Pretoria, South Africa (AP) — Oscar Pistorius offered $34,000 to the family of girlfriend Reeva Steenkamp after he killed her, but they rejected it because they did not want “blood money,” a prosecutor said Tuesday at the sentencing hearing for the double-amputee athlete.

Chief prosecutor Gerrie Nel also referred to separate monthly payments of $550 that Pistorius apparently did make to Steenkamp’s parents after they asked for help. Nel said those would be paid back in full.

The revelations emerged while Nel was cross-examining a social worker over what Pistorius’ punishment should be for shooting Steenkamp. The social worker testified that Pistorius should be placed under house arrest, rather than sent to prison, after his conviction for culpable homicide, or negligent killing.

Social worker Annette Vergeer, one of four witnesses called by the defence, said South African jails are violent and overcrowded and that the athlete would be under duress because of his disability and fragile mental state resulting from the night he fired four times through a toilet door in his home, killing Steenkamp. Pistorius testified he mistook her for an intruder and denied prosecution assertions that he shot her during an argument.

Additionally, Vergeer said, Pistorius — who in 2012 was the first amputee athlete to run at the Olympics — has the potential to be a productive member of society again. A sentence of house arrest and work at a school for disabled children would be more appropriate, she said.

Prison “will not assist him but will break him as a person,” she said.

Prosecutor Nel challenged Vergeer, saying her knowledge of the South African prison system was limited and out of date. He also asked why she didn’t mention in her report on Pistorius that she knew the family of the woman he killed turned down money.

Outside the courtroom, a lawyer for Steenkamp’s parents said they had asked him to contact Pistorius’ attorneys weeks after the Feburary 14, 2013 shooting because they were struggling financially. Pistorius offered them monthly payments and asked they be kept confidential, Steenkamp lawyer Dup de Bruyn said.

Yet Steenkamp’s mother June referred to the other offer of $34,000 that the family rejected as “blood money” and asked prosecutor Nel to call it that in court, de Bruyn said.

“The words ‘blood money’ are her words,” de Bruyn said.

Judge Thokozile Masipa found Pistorius, 27, not guilty of murder, concluding he acted hastily and with excessive force, but didn’t intend to kill Steenkamp, a 29-year-old model. The judge has wide latitude when deciding on a sentence. Pistorius could receive a fine and a suspended jail term or as many as 15 years in prison.

Vergeer and another social worker recommended that Pistorius be given a three-year correctional supervision sentence, which would place him under house arrest for periods and require him to do community service. Prosecutors insist that such a sentence would be inappropriate and say Pistorius should be sent to prison, citing the level of negligence he showed when he fired his 9 mm pistol without checking who was behind the door.

Family members of Pistorius and Steenkamp attended the second day of the trial’s sentencing hearing, which is expected to last around a week. Pistorius mostly sat looking down during Tuesday’s testimony.