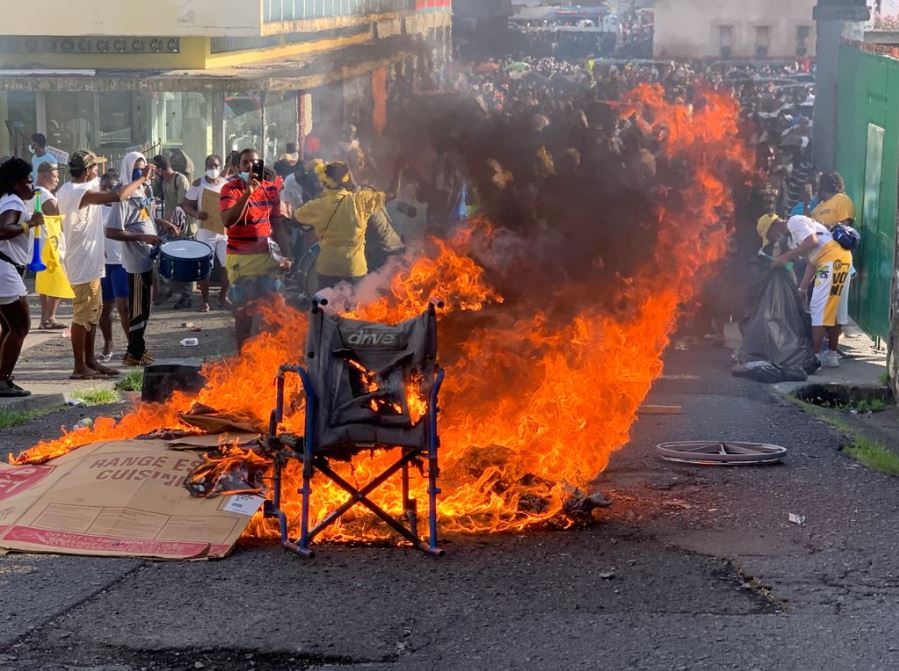 The streets of Kingstown for over an hour turned violent, with two persons being injured.

Among the injured were the island’s Prime Minister Ralph Gonsalves and one of the protesters; both men were taken to the island’s main hospital.

Fires burned in the street outside the island’s prison, where protesters at the time said the Prime Ministers’ convoy would use that route to return to parliament, thereby avoiding the demonstrators.

Leader of the Opposition Dr Godwin Friday in parliament on Thursday evening said he condemns such actions in which the Prime Minister was injured.

Police dressed in riot gear were called out sometime after 5 pm on Thursday to quell the growing demonstration, these apparently incensed protesters.

Protesters are demonstrating amendments to the Public Health Act, which must be withdrawn according to the head of the Public Service Union, Elroy Boucher.

“These amendments will touch the people, every Vincentian, if they are allowed to become law, vaccinated or Unvaccinated,” Boucher said.

Protesters and omnibus operators brought traffic to a halt around the rush hour as workers tried desperately to make their way out of the capital.

Unions including the Nurses Association, Teachers Union, Police Welfare Association, Public Service Union held a joint press conference earlier this week telling their members that the proposed amendment to the bill would make it mandatory for specific categories of workers.

In a release, the Nurses Association said;

“St. Vincent and the Grenadines Nurses Association strongly oppose the proposed amendments to the Public Health Act that will adversely affect our Nurses’ fundamental rights and freedoms and the entire Vincentian society”.

Prime Minister Ralph Gonsalves stated that there would be no mandatory vaccination program on the island.

“This thing that we are amending the Public Health Act to make vaccination of everybody mandatory, that is not so.”

“We are amending the Public Health Act because there are certain categories will have to make regulations for as the circumstances admit for either mandatory testing after the required requisite notice periods and the like and or testing.”

“We are amending the Public Health Act because there are certain categories will have to make regulations for as the circumstances admit for either mandatory testing after the required requisite notice periods and the like and or testing.”